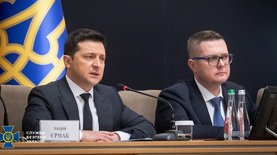 The president Vladimir Zelensky allegedly wants to dismiss the head of the Security Service of Ukraine Ivan Bakanov. This is reported Politico referring to four officials close to the president and one Western diplomat who advised Kyiv on the reform of the SBU.

One of the sources close to Zelensky said that Bankova was unhappy with Bakanov and was working on replacing him. According to the source, the head of the SBU is not satisfied with managerial skills. “Now we need crisis management skills, which we think he doesn’t have,” the source said.

According to the sources, not only Bakanov himself is of concern, but also the actions of some top SBU officials at the beginning of the large-scale Russian invasion. In particular, this applies to three:

– Former head of the Kherson department of the SBU, General Sergei Krivoruchko. According to the Ukrainian authorities, he ordered the officers to evacuate the city during the Russian assault against Zelensky’s orders.

– Assistant to Krivoruchko, Colonel Igor Sadokhin. According to the Ukrainian authorities, gave the Russians the location of minefields and directed their aircraft.

– Former head of internal security of the SBU Andrei Naumov. Left Ukraine a few hours before the large-scale invasion of the Russian Federation. Detained in Serbia. Zelensky named him and Krivoruchko “traitors”, and also stripped them of their titles.

The capture of Kherson allowed Russian forces to gain a foothold in southern Ukraine, journalists say. “Someone must suffer for this,” the source of the publication noted, hinting at Bakanov.

The SBU declined to comment. LIGA.net Politico publication. LIGA.net also reached out to the Office of the President for comment.

Read also: Arestovich: The south was supposed to be one of the most successful places of defense, but there was a betrayal

Aviation of the Armed Forces of Ukraine hit the Russian army in the Lysichansk region and prevented the advance of the enemy – news of Ukraine, Politics