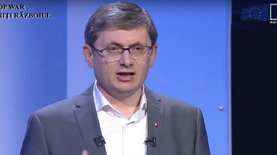 Speaker of the Moldovan Parliament Igor Grosu said that the country will support the sanctions against Russia, which the EU intends to extend. He said this on the air of the Moldovan TV channel, reports Newsmaker.

He noted that the status of an EU candidate implies a manifestation of solidarity with European countries, therefore he is sure that Moldova will support the sanctions against Russia, which the EU discussed at the June 23 summit.

“We will show solidarity with the EU. Both the status and our aspiration to Europe obliges us to continue to be solidary. The purpose of these sanctions is to stop the war, so that after that diplomats sit down at the negotiating table and find a solution,” Grosu said.

When asked what Russia’s reaction to this decision would be, Grosu replied that Moldova hopes to maintain good relations, but asks that its European course be respected.

“Yes, we want to maintain good relations with you. You have power. In addition, several hundred thousand Moldovans live and work there (in Russia – ed.). We think about them. We want to trade with you. But we ask that our decision to join the EU be respected,” Grosu said.

The speaker of the Moldovan parliament also noted that all Russians and the Russian-speaking population of Moldova “feel good in the republic”: “They are not intimidated, they are very well integrated into society. We want to be respected.”

Earlier, Moldova refused to impose sanctions against the Russian Federation. Moldovan President Maia Sandu spokethat “leaving the country without energy resources and destabilizing the situation, we will not help anyone.”

Volodymyr Zelensky discussed the situation at the front with Mark Rutte before the NATO summit – Ukrainian news, Politics