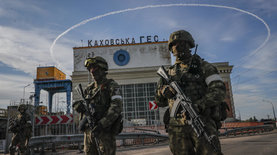 Cases of kidnapping of relatives of Ukrainian servicemen in the temporarily occupied territories are becoming systemic. The press service of the Main Intelligence Directorate of the Ministry of Defense reports that after the abduction, the occupiers can contact the military and demand that they come to the temporarily occupied territory in order to save their relatives.

“Unfortunately, the databases of Ukrainian citizens fall into the hands of rashists when they seize administrative buildings or with the help of traitor collaborators,” Ukrainian intelligence explains.

According to the Main Intelligence Directorate, most of these cases are recorded in the temporarily occupied territories of Zaporozhye, Kherson and Mykolaiv regions. At the same time, both adults (including women and the elderly) and children are kidnapped. In particular, it recently became known that the Russians took hostage several children of another Ukrainian soldier.

“In the future, the Russians may contact the military and demand to arrive in the occupied territories in exchange for the safety of their relatives,” the GUR said.

For security reasons, intelligence does not name the names of the injured servicemen and abducted relatives, but assures that none of these cases goes unnoticed by the state.

Special services told how the conversations of the occupiers are wiretapped – news from Ukraine, Politics

Scholz did not answer a question about security guarantees for Ukraine. Said five words – video – news of Ukraine, Politics