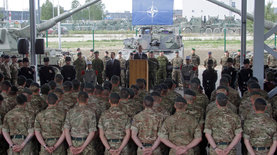 Estonian President Alar Karis announced the need to “prepare for any situation” against the backdrop of a full-scale Russian invasion of Ukraine and announced an increase in Estonian ground defense. He said this in his speech at the Victory Day parade in Kuressaare. Delphi.

He said that “against the backdrop of the horrors of the Russian troops,” Estonia is inspired by the courage, resourcefulness and strength of the Ukrainian people, the Armed Forces of Ukraine and territorial defense. He emphasized that since the beginning of the full-scale invasion of the Russian Federation, the number of TROs has increased 18 times – from 6,500 to 117,000.

In Estonia, according to him, they also reacted to the war of the Russian Federation against Ukraine, and from February 24 to the present day, more than 3,300 people have applied to join the National Defense Union (a volunteer paramilitary unit that is part of the Estonian Defense Forces – ed.) . At the same time, according to him, more than a third of them joined the Naiskodukaitse, the women’s organization of the Defense League.

“This kind of preparedness-focused, preventive thinking is exactly what will help us as a people and nation to be prepared for any situation,” Karis said.

According to him, next year Estonia will further increase its ground defense – by 10,000 people, relying on reservists. The Estonian leader noted that this would provide an opportunity to strengthen the national defense and help the reservists to better preserve and hone their skills.

He also announced the results of one of last year’s surveys: 98% of the reservists would be ready to participate in defensive actions if Estonia was attacked.

“Germany is firmly for Ukraine.” Steinmeier stood up for Scholz in front of Zelensky’s criticism – Ukrainian news, World

“It will arrive on time.” Scholz is confident that German weapons will help the Armed Forces of Ukraine in the battle for Donbass – news from Ukraine, World