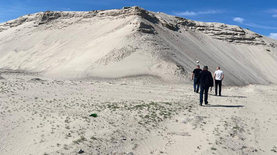 The Security Service of Ukraine blocked the assets of the companies of the Russian oligarch, which were illegally extracting minerals on an industrial scale in Ukraine. The oligarch himself supports the war against Ukraine, the SBU noted. About whom it is, the SBU does not report.

Illegal business, according to the SBU, was organized in the Kyiv and Zhytomyr regions. There, his company mined sand and gravel without paying taxes on an especially large scale.

The agency also claims his involvement in raider seizures of mining enterprises.

The Russian oligarch withdrew money to the Russian Federation through an extensive network of offshore companies. His company used the proceeds from illegal mining to finance a full-scale Russian aggression, as well as to provide material support for the occupation administrations in Crimea and eastern Ukraine, the SBU reports.

According to the investigation, he also became the founder of one of the Russian companies, together with one of the leaders of the DPR terrorist organization.

According to the prosecutor’s office, a criminal case has been opened against the oligarch on the fact of illegal mining, tax and land payment evasion, withdrawal of funds and financing of terrorism. According to the materials of the SBU, the personal property of the oligarch, the assets of controlled enterprises and illegally mined minerals totaling more than UAH 1 billion were seized.

Macron: Willing to do anything to stop Russia’s military efforts and continue talks – Ukraine news, Politics

Draghi, Scholz and Macron together in the Ukrainian train. But Ukrainians are still not happy – Ukrainian news, Politics