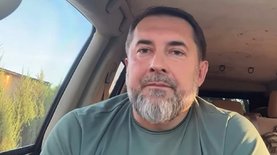 In the industrial zone of Severodonetsk, which is controlled by the Ukrainian military, a large number of protective structures have been destroyed under constant shelling from the Russians. Perhaps the Ukrainian defenders will have to withdraw to the new fortified areas. This was announced on Radio Liberty by the head of the Luhansk OVA Sergei Gaidai.

He noted that the Russians threw all their forces to occupy the Luhansk region in the near future. Fighting continues on all fronts.

“Under constant shelling there (in the industrial zone of Severodonetsk – ed.) a lot of defensive structures have already been destroyed. It may be necessary to retreat to new fortified areas,” Gaidai said.

Lisichansk is now under heavy shelling. Despite this, the authorities bring humanitarian supplies to the city and evacuate people. About 40 people left today.

Residents of Severodonetsk, who are now hiding on the territory of the Azot plant, categorically refused to leave. If the city is occupied, they, according to Gaidai, will have the opportunity to go only to the occupied territory of the region.

In the recently occupied territories, the occupiers have already begun the so-called “filtering”, the head of the UVA said. The Russians are hunting for activists and people involved in military affairs, and relatives of such categories of people are also in sight. Men, according to Gaidai, are forced to go to war against Ukraine.

Read also: Occupiers are likely to reach Lysichansk in the coming days – ISW

Venediktova: Employees of the shopping center in Kremenchug may be held accountable – news from Ukraine, Incidents

APU advanced 10 km in the direction of Melitopol – the mayor of the city – news from Ukraine, Politics

Kuleba responded to the reaction of the Russians after the strike on the shopping center in Kremenchug – Ukrainian news, Politics

Candidate status for Ukraine is a moral obligation of the European Union: Speaker of the Latvian Seimas – Ukraine news, Politics