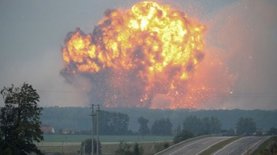 Russia has been hitting the munitions depots and arsenals of Ukraine and its suppliers in Eastern Europe for years before launching a full-scale invasion. This material is published The Washington Post.

According to Deputy Minister of Defense Hanna Malyar, Russia spends more than 60,000 shells per day, Ukraine – ten times less. At the same time, Ukrainian artillery needs shells of the same 122 mm and 152 mm calibers that the Russian army uses, but there are very few such ammunition outside of Russia.

The shortage of shells in Ukraine is largely due to the fact that for several years before the start of a full-scale invasion of Ukraine, Russia struck at places of storage and possible suppliers of ammunition, the newspaper writes.

The newspaper reports that an “invisible war” is going on in the world arms market for 152 mm caliber shells. According to an arms dealer, officials in an Eastern European country were unable to purchase such shells because the Russians had warned they would “kill them if they sold anything to the Ukrainians.”

At the same time, the countries that have retained stocks of 152 mm caliber shells are mainly the former republics of the USSR, as well as some states in Africa and the Middle East, many of which are hesitant to support Ukraine due to close ties with the Kremlin.

The arms dealer told the publication that in some cases, Russia was able to disrupt a deal that was practically concluded by Ukraine, when a front buyer outbid the price in the interests of the Russian Federation at the last minute.

Rapprochement with Ukraine is a historic moment, everyone in the EU has a special responsibility – Burbock – news from Ukraine, World

The rematch between Usyk and Joshua was officially scheduled for August 20 – news from Ukraine, Sport