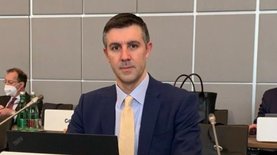 The British ambassador to the OSCE said that following a series of geopolitical miscalculations in four months of all-out war against Ukraine, the Kremlin “made another catastrophic mistake”: its owner Vladimir Putin mistakenly believes that he will win, because over time the world will “get tired” of supporting Ukraine. About it Neil Bush declared at a meeting of the organization.

“Let me be clear: we will never tire of defending freedom and democracy. We will be with you until you ultimately win,” he stressed.

The diplomat recalled that Russia underestimated the determination and heroism of the Ukrainian people, “who successfully defended their capital and forced the Russian invaders to retreat.”

Also, Bush said, the Kremlin underestimated the determination of the international community of the free world, which “has only united in support of Ukraine, strengthened cooperation and carried out political and economic isolation” of the aggressor.

“And finally, they underestimated the power of the principle of sovereignty in the 21st century. Putin’s actions only further drew attention to the right of all countries to determine their own foreign, defense and security policies,” the ambassador said.

Right now, Bush added, the immediate priority is maintaining military aid West: “We and our partners will continue to supply weapons, equipment and ammunition to counter the Russian army.” He stressed that no one should force Ukraine to the surrender of territories: “Instead, we must act to strengthen its position.”

“We will help Ukraine win on the battlefield, address the humanitarian consequences of Russian crimes and bring the perpetrators to justice, and restore what the Russian government and the Russian military have destroyed. We will not rest until those responsible for the atrocities are brought to justice, no matter how long it takes didn’t take,” the diplomat assured.

Bush summed up by saying that “together we will show Putin that his attempts to subdue Ukraine with untold violence will only make it stronger and more stable”.

“This is what a Ukrainian victory will look like,” he said.

Read also: Which countries promised a lot, but so far “little” helped Ukraine with weapons and money: infographics

Semenchenko was released under house arrest. Intelligence chief Budanov vouched for him – UP – news of Ukraine, Politics