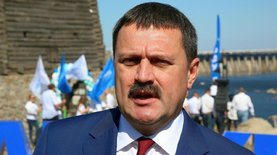 Security Service of Ukraine informswhich exposed the intelligence network of the special services of the Russian Federation, which included the people’s deputy Andrey Derkach.

The SBU reports that it has been conducting operational development of this structure for a long time and neutralized it at the beginning of the war after the detention of Igor Kolesnikov, a former assistant to Derkach, who provided communications and transfer of funds between the Russian special services and Derkach.

Kolesnikov, after his arrest, agreed with the investigation and gave detailed testimony, including details of the activities of the agent network and its role in preparing for a full-scale war. In May, the court had already sentenced Kolesnikov under the article on high treason.

According to Kolesnikov, Derkach was recruited in 2016. The top leadership of the GRU worked with the deputy – the head of the department, Igor Kostyukov, and his first deputy, Vladimir Alekseev.

Derkach, according to the SBU, received funding from the Russians to create private security structures (PSCs), which were planned to be used in the seizure of Ukraine.

Kolesnikov says in the video that “at the entrance of (Russian) troops, when it was clear that the cities were surrendering, these private security companies were supposed to ensure the passage of equipment, sit on armor with Russian flags, and thus ensure peaceful entry into the cities.”

According to the SBU, when capturing Kyiv, the Russians planned to use two special forces brigades and special operations forces that were supposed to come from Belarus, capture the government quarter of Kyiv and convene a “veche” in the Verkhovna Rada, which would vote for the creation of a “new government”.

The SBU continues to work on bringing to justice all those involved in the identified agent network.

The Prosecutor General initiated a pre-trial investigation against the current MP Andriy Derkach.

Andriy Derkach participated in the 2019 early parliamentary elections as a self-nominated candidate, won in the majoritarian constituency No. 159 (Sumy region).

Budanov: Withdrawal of troops from Severodonetsk is correct, it is needed for a strategic victory – Ukrainian news, Politics

The Russian army suffers losses in the south and fled, having failed the assault near Maryinka – General Staff of the Armed Forces of Ukraine – news of Ukraine, Politics