Overheard in Moscow: what did you talk about in contemporary art galleries 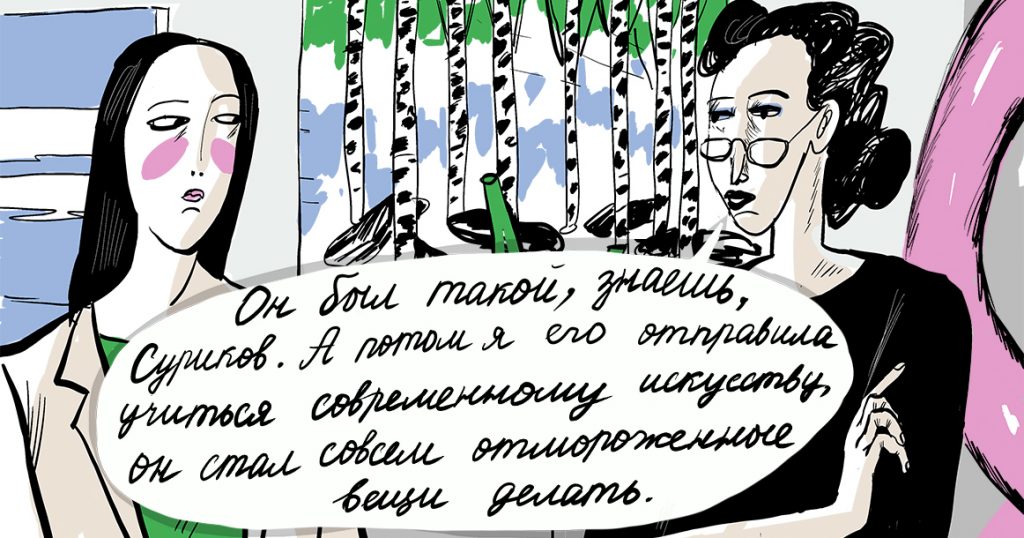 – No, in general, the space is such that it gives perspective.
– It gives prospects, but does not give money.

I want to watch some horror. To be downright scary.
– Oh, I was watching horror. It is called “Julia Peresild plays the princess.”

I tried to translate it somehow. All this through the form, but it does not work. Or not clear.
– No, of course, this is an intuitive process.
– No, it’s just that my audience is 30+, and everything up to that is already starting memes in their heads.

– Well, live here already. Pioneers, stall, nineties.
– Well, what kind of pioneers in the nineties? How the Union was canceled, all the pioneers, lambada.

– No, well, here the flaming carpet opens up in a completely different way.
— No texture because. No texture.

– He was like that, you know, Surikov. Everything is correct and realistic. And then I sent him to study modern art, and he began to do some completely frostbitten things. Not vile, but just so frostbitten.

– In contemporary art, if done very badly, it can be very good. This must be understood. And use.

“Let’s give another circle, maybe some chakras will still open in us …

I was thinking about hanging something like this at home. Although the brain does not eat, but hanging an abstract if is not clear what.

– There are many plans. Lots of creativity. She will have a series of dogs, a series of cats and some other series, too, probably.

– In terms of the image, I wanted to be like Gorillaz.
– You mean the Gorillaz band? Musical?
– Yes, but then I realized that I shouldn’t focus on geniuses. You have to be a genius yourself.

— Contemporary art is such a clearing, you know. Everyone thinks that anyone can come here and trample. And you also need to know how to stomp. This is not some bullshit for you.