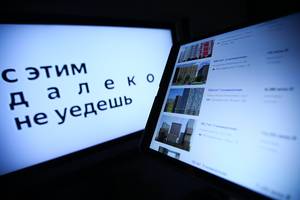 The current year has brought obvious changes in the business strategy. Thus, Western sanctions pressure has damaged the field of online advertising, significantly reducing the number of available tools and platforms. Despite the fact that more than six months have passed since the introduction of restrictive measures, not all entrepreneurs, companies and businessmen have managed to reorganize in a new way. Artur Sargsyan, commercial director of Calltouch, stated this during the last day at the Callday-2022 forum.

A significant proportion of those who only yesterday promoted their products and services through advertising on the World Wide Web are now in a situation of zugzwang. Any of their advertising move brings a negative result. Artur Sargsyan noted that according to the research of the company he represents, which involved about 10,000 respondents, as well as the experience of Calltouch client firms, most business representatives experience difficulties in promoting their products.

There is a forced abandonment of the usual social networks, difficulties in finding targeted traffic, loss of channels for advertising. As for search engines, most of the respondents continue to use Yandex (about 59.8%) and Google (21.3%).

“Already in the first quarter, we faced a large number of restrictions that prevented us from using our usual services. And we were faced with a choice: to refuse or to find a replacement? As a result, more than half of the respondents began to use Google services less,” the expert noted.

An interesting picture was also shown by the data on the use of instant messengers. The majority in the current conditions prefers to use Telegram — 65.1%, then WhatsApp — 19.5%, 9 Google messenger — 9.9%

“At the same time, is using instant messengers to communicate with relatives and friends in order to make purchases through them? At many conferences, we hear that messengers are the future. But 61% of respondents do not use instant messengers as part of shopping and communication with a potential client, giving their choice to phone calls, applications on the website, and so on,” Artur Sargsyan said. At the same time, he is sure that in the context of global digitalization, the client should be given a choice – where and how to communicate with the business.

As for social networks, the sites banned in the Russian Federation have clearly lost their popularity. About 69.3% of people began to use such networks less frequently, many switched to the domestic VKontakte network. And this means that the client base has decreased even more. Not all businesses were able to find an alternative to the “departed” channels or create new ones where they did not work before.

The loss of Google’s advertising tools has also become a painful topic for entrepreneurs. Statistics show that only 38% redistributed advertising from there, 38% partially, 24% still have not found analogues.

“At the same time, it is important to take into account that the audience has not decreased by 10 times, that is, everything has been redistributed to organic traffic. It is impossible to vote and move ads to the first places, it is also impossible to respond promptly. About 48% of respondents have reduced their advertising budgets,” the expert added.

But the key problem, according to Artur Sargsyan, is that most of the business is fighting for the same audience, which was “bored” on new sites. Obviously, the growth in the cost of advertising that is currently observed is also connected with this. 61% of those surveyed said they are spending more than before on customer acquisition. The cost per lead increased by more than 30% – from 6610 in January to 8695 rubles.

Back to the roots

Although expanding a business by expanding the range of methods of communication with a client is not a new thing, many entrepreneurs have found themselves at a loss when faced with the current market realities. They kept thinking about how to attract new people, forgetting about having a current customer base.

Calltouch found that only 54% of those surveyed call existing customers, 35% do mailing lists, and the rest do nothing. In fact, experts are sure that businesses need to work with both new and current consumers, and the latter will “cost” advertising for entrepreneurs many times cheaper.

At the moment, in Russia there are several domestic solutions at once to preserve and expand the business audience. One of them is Calltouch Leeds, a marketing optimization platform that allows you to select the audience, conditions (for example, return customers to the site according to the specified parameters), and the trigger time. It makes it possible to determine the most effective actions in the context of achieving the goal. For example, whether to send sms, a message to a messenger, email, or use CRM.

Calltouch CEO Alexander Avdeev recalled that the company’s proposals help to collect various information about the user as quickly and accurately as possible, which in the future gives the entrepreneur a chance to competently optimize his budget. For example, to correlate a purchase with a specific site visitor and offer the latter exactly what he wants.

It is worth noting here that yesterday the MyTracker analytics and attribution system, which is a VK project, opened up access to a new tool – “Audience”, with the help of which marketers and publishers can segment users of their mobile applications and websites according to advanced impersonal features. The received data can be automatically uploaded to advertising systems in order to retain and engage customers.

“Several parameters are available for audience segmentation: activity in the application, geography, device specifications, churn probability, and other features. Aggregated data will help improve the accuracy of hitting the target audience and build marketing campaigns based on the needs of users and their past experience. Depending on the segment in advertising, you can adapt offers and creatives, as well as immediately exclude users with a high probability of churn or devices with suspicious activity from showing in order to optimize the budget, ”VK spokesman Sergey Makrov shared the details with Expert.

He clarified that when adding segments, it is necessary to set up integration with the advertising platform – myTarget or VK Advertising. Audience information is updated daily and is available in the statistics block. Thus, marketers can analyze data on sample size and number of new users for a selected period.

The Yandex.Business team is also ready to support entrepreneurs. At the moment, this platform offers promotion services on its services. Project manager Yuri Ustinov noticed on Callday that a service client can provide almost any link to advertising, from Telegram channels, advertising posts to which will form a neural network, to cards in the marketplace. The service allows you to promote your business all over the Internet, even on a limited budget, which is especially important for small and micro businesses, which are usually not ready for large investments in advertising.

However, some companies that initially had no connection with the Internet business managed to rebuild even during the pandemic, and the current crisis has not shaken the stability they have achieved. According to Nikolai Pryanishnikov, CEO of World Class and UFC Gym Russia fitness chains, now the Russian Fitness Group is the largest fitness company in Russia (120 clubs) and one of the largest in Europe (opened in 10 different countries).

“Two years ago we already faced a crisis. Coronavirus, all clubs in the network are closed. I no longer have any revenue, 3,000 employees, clients are sitting at home. It was the biggest crisis in our history, banks began to close credit lines. All in all, it was a difficult test. And the first thing we did was create digital products, online training. There was yoga, and active training, and dancing. As a result, we conducted 3300 training sessions, watched them 40 million times, 1 million people trained with us from all over the world. It was a super success. That is, we received new customers and opened new directions. As a result, we are now monetizing both offline and online formats,” said Nikolai Pryanishnikov.

At the same time, according to the latest statistics, despite the difficult economic situation, in the 3rd quarter of 2022, on average in Russia, the revenue of the fitness market increased by 1.2 billion rubles, by 3%. Did not drink from the trend (if not to say – they became one of its creators), and the networks of Nikolai Pryanishnikov. In an exclusive commentary to Expert magazine, he noted that now they have continued to grow in the number of customers. New clubs are also opening.

“We opened 4 clubs this year, it gave us growth. We have signed many agreements with franchisees. Plus, I am very glad that despite all the difficulties, attendance and the purchase of new subscriptions remains at a fairly high level. People are in cities, they may have a psychologically difficult condition, but they go to fitness clubs to relax. Well, we help. For example, now we can meditate. Some choose martial arts. Sometimes physical activity is very useful, it gives self-confidence,” he said. At the same time, World Class managed to build on previous success.

According to Nikolai Pryanishnikov, the number of online network clients is still greater than offline – about 400,000 against 300,000. The company’s social networks continue to develop, keeping the attention of users. It is worth noting that this, of course, is due precisely to the right marketing strategy and a competent approach to advertising.

The Ministry of Defense announced the defeat of the “foreign legion” of the Armed Forces of Ukraine (November 27, 2022)