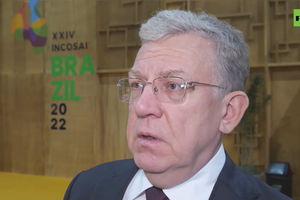 The situation in the Russian economy is better than originally expected, and this year the country’s GDP will decline by only 2.9-3.3% instead of the previously forecasted 7%. This was stated in an interview with RT by the Chairman of the Accounts Chamber Alexei Kudrin. Inflation, according to him, is able to drop to 4% as early as 2024. At the same time, the budget deficit may be higher than expected, but Russia has the resources to cover the costs, Kudrin assured.

“The unprecedented sanctions regime that has been imposed on Russia, of course, affects our economy, and initially it was predicted that GDP would fall by more than 7%. Nevertheless, now, I think, the fall will be only about 2.9-3.3%,” Kudrin said.

According to him, the flexibility of the Russian economy is quite high, many companies have already reoriented to new sales and procurement markets. The head of the Accounts Chamber called the Ministry of Economic Development’s forecast of a 0.8% reduction in GDP in 2023 realistic, while he did not rule out “more complex scenarios, taking into account possible restrictions on Russian oil sales or the introduction of a ceiling on prices for our energy resources.” After two years of decline, the Russian economy will need two or three years to recover and return to pre-crisis levels, if there are no “new difficult events,” Kudrin said.

“Inflation is expected to be around 12% in 2022. In this sense, we are certainly experiencing a big leap forward. The peak of this inflation was in April, when in annual terms it rose to almost 18%. However, there is now a steady decline. The inflation target we set for ourselves in the medium term – 4% – will only be achieved in 2024 or 2025. At the same time, in 2023, the figure may be from 5 to 8%, ”Kudrin suggested.

The head of the Accounts Chamber believes that in the next three years there is no need to worry that the Russian economy will have a difficult time. Despite the fact that the budget deficit may turn out to be higher than forecasts due to “uncertainties and the emergence of more difficult situations with energy exports”, Russia “has a large margin of safety, primarily in the form of reserves accumulated in previous years, including from the successful sale of oil,” Kudrin assured.

The Ministry of Defense of the Russian Federation announced the destruction of a large number of fighters of the Armed Forces of Ukraine in the Krasnolimansky direction (October 31, 2022)