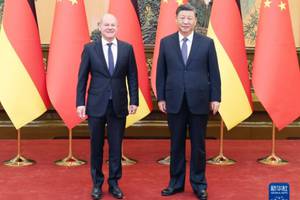 Chinese President Xi Jinping and German Chancellor Olaf Scholz at a meeting in Beijing discussed, among other things, the Ukrainian crisis. The Chinese leader stressed that under the current conditions, the international community should jointly support all efforts to resolve the situation peacefully, the Chinese Foreign Ministry said in a statement following the talks.

“Xi Jinping said that China supports Germany and the EU in their important role in advancing the peace talks and helping to build a balanced, efficient and sustainable European security system. Under the current conditions, the international community should jointly support all efforts for a peaceful settlement of the Ukrainian crisis, call on all parties concerned to reason and restraint, establish direct contacts as soon as possible, create conditions for the resumption of negotiations, and jointly counter the use or threat of use of nuclear weapons. at the Chinese Foreign Ministry.

At a press conference following the meeting, Scholz acknowledged that the current international situation is complex and serious, and “the European continent is facing unprecedented new challenges.” The Chancellor stressed that Germany strongly supports economic globalization and opposes “decoupling”. The world needs multipolarity, Germany opposes camp confrontation and is “ready to play its part in promoting the development of relations between the EU and China,” he said.

Moscow will lease land at preferential rates to 32 companies with the status of industrial complexes and technoparks – Efimov (November 7, 2022)