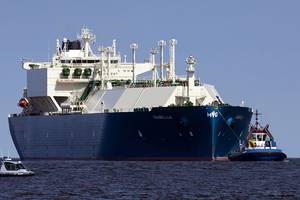 Due to high LPG prices in Europe, European governments, especially those soon to be re-elected, are understandably very concerned about their future. It is not surprising, according to Forbes magazine, that they are now looking for someone to blame for the energy crisis and high energy prices and, above all, for gas. This, of course, is not about Russia, which is now to blame for everything, so to speak, a priori, but about other “switchmen” who profit from astronomical prices for liquefied natural gas (LNG) and fuel in Europe.

German Economy Minister Robert Habeck criticizes the United States and other “friendly” countries for astronomical prices for LNG, the main gas on the continent now. French President Emmanuel Macron is a supporter of this version. He accused America of “double standards” because in their country the Americans sell gas 3-4 times cheaper than Europeans.

However, US LNG exporters are not the only ones profiting from super-expensive gas. Moreover, they profit much less than other players.

The thing is that the contracts of American exporters are different from the contracts concluded by exporters from other countries. The price of US LNG depends on the price of the underlying US gas hub, the Henry Hub (HH), which serves as America’s main marketplace of exchange for both physical and future contracts. US HH prices have indeed risen significantly lately, but they are no match for the prices of the European hub, the Dutch TTF, and the Japanese hub.

Overwhelmingly, US companies sign two types of contracts: or service contracts, which means the company does not own the LNG; or sales contracts. In both cases, the exporter loses the right to own LNG at the moment when the cargo enters the LNG carrier. By the way, in America it is considered illegal that the seller, in this case, of gas to Europe controls the place of delivery of the cargo or the price, because the gas no longer belongs to him.

The main beneficiaries of the huge difference in HH gas prices and prices in Europe, which earn up to 400% of the profits, are, according to Forbes, intermediary companies that buy natural gas or LNG in the US and sell liquefied gas in Europe.

Ironically, despite the complaints of Habek and Macron, most of these companies are from Europe, while there are almost no American firms among them. Europe’s “little secret” is that long-term contracts for the supply of American LNG are signed mainly by large oil companies headquartered in Paris, The Hague and London, as well as in Spain, Portugal, Italy and even Germany. Their names can be easily recognized from documents that are in the public domain.

Of course, American gas for further resale is bought not only by European companies, but also by companies from Japan, Korea, India and other countries. The main thing to remember, Forbes emphasizes, is that a very small proportion of US LNG enters Europe directly from the US through US companies. And one more nuance: almost all of this gas is not supplied at European prices.

The second group of players who buy LNG in America and sell it in Europe are traders. They buy gas on the secondary market. And among these companies, American firms are also very few. Another important detail: the few American companies that sell gas to Europe directly sell mainly its surplus, because approx. 95% of US liquefied natural gas exported is supplied under long-term contracts.

As for the second group of players, these are mainly trading companies from Switzerland and sometimes from London.

Regardless of who specifically skims the biggest cream off the American LNG trade, President Macron and Minister Habek are right about one thing: Europeans are paying astronomical money for gas, because prices in the Old World are several times higher than prices in America itself.

Western European economies have been receiving cheap gas from Russia through gas pipelines for several decades. Suffice it to say that Russian gas satisfied almost half (45%) of Europe’s need for “blue fuel”.

American companies offered LNG to European companies under long-term contracts at prices significantly lower than current prices in Europe. However, all proposals were rejected. American presidents urged the Europeans, and primarily the Germans, to build LNG infrastructure as a backup option just in case. However, all persuasion was in vain. As a result, Germany, by the way, the fourth economy on the planet, has not found a single LNG terminal.

France, for its part, in 2020, for example, refused to approve a long-term contract between Engie, a company that supplies gas to the French population and businesses, with the American gas company NextDecade. This contract, if it were signed, would allow the French to now receive gas at prices close to those within the United States.

The price of US LNG can be significantly lower than the prices of the European hub, but this requires additional LNG infrastructure, which usually takes 3-4 years to build. Europeans now only have to buy gas on the spot market, where prices are currently very high due to a sharp reduction in gas supplies from Russia.

Cinemas in the Russian Federation collected more than 550 million rubles for the weekend for the first time since mid-February (November 7, 2022)

The Kremlin appreciated the withdrawal of Russian troops from Kherson (November 11, 2022)