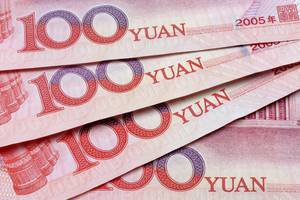 Since the beginning of the year, VTB’s retail clients have opened deposits in Chinese currency in the amount of 4 billion yuan, or 36 billion rubles. The average deposit check since March, when Investment for the Future was launched in yuan, has almost doubled and exceeded 380,000 yuan in October. Most often, clients placed funds for up to six months, the bank’s press service reported.

“Most often, VTB clients place Chinese currency for a period of 3-6 months, with semi-annual deposits accounting for 85% of the total number of such deposits. Another 10% of deposits are opened for a period of more than six months and up to a year. Short-term deposits in yuan with placement of funds for 91 days accounted for only 5% of the total,” the bank said.

VTB noted that the maximum rate on deposits in yuan is 1.2% per annum when placing money from six months to a year. When choosing a term from 91 to 180 days, the yield is 0.7% per annum.

According to Roman Glazov, Acting Head of Savings at VTB, customer interest in deposits in Chinese currency rose sharply in the spring and is still quite stable. However, the most popular savings instrument among Russians, according to him, is still a ruble deposit.

Sony Pictures will continue to operate in Russia under a different name (November 8, 2022)

Small businesses are not allowed into electronics (November 25, 2022)

Shoigu ordered to withdraw troops to the left bank of the Dnieper (November 9, 2022)