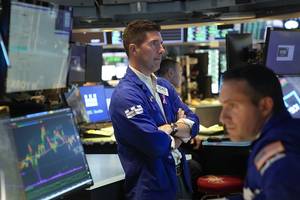 The “bear rally” that accelerated yesterday in the US stock market turned out, as it usually happens, to be especially cruel to the bears. Their forced purchases gave a powerful impetus to the growth of stocks and bonds – and it was those papers in which many short positions accumulated that showed the most striking results.

But the bulls had a reason to buy, as well as the less publicized stock exchange animals – greedy and quickly lighting up with ideas of pigs. Data on October inflation in the US, released before the start of trading, amazed everyone.

It turned out that it did not exceed expectations, as the bears, who increased their shorts, believed, and did not even fall from 8.2% to 8%, as the consensus of analysts expected, but fell to 7.7%. At the same time, core (excluding food and energy) inflation, which the Fed pays more attention to, suddenly dropped to 6.3%.

This was seen by many as a sign that the regulator’s efforts to slow consumer price growth have paid off, inflation has passed its peak and monetary tightening will slow down. And the WSJ even suggested that Fed Chairman Jerome Powell would gracefully retract his recent words that the rate cap would be higher than expected after some time.

According to the CME FedWatch Tool, the market yesterday estimated at 86% (against 55% a day earlier) the probability of a 50 bp hike in December, rather than 75 bp. And the bears got hit hard.

Treasury bonds rose sharply. The 2-year US Treasury yield – especially sensitive to the current monetary policy – fell during the day from 4.631% to 4.29%. Such movements have not been seen here for more than a decade. But it is precisely these bonds that, according to the Commodity Futures Trading Commission, saw a record volume of short positions last week.

Major US stock indexes showed one of the best days in their history. The Dow Jones Industrial Average soared 3.7%, the S&P 500 soared 5.54% and the Nasdaq Composite soared 7.35%. It was the fastest rise in US stocks since the spring of 2020.

But its leaders, as you can easily see from the results of Nasdaq, were papers that were actively sold all this year. And it wasn’t just rate-sensitive tech stocks.

Thus, the basket of stocks tracked by Goldman Sachs with the maximum share of “shorts” showed an excellent result. It rose 11%, breaking an eight-day decline. This is her fastest soar since March 2020.

The old stock market adage broke down: “Bulls make money, bears make money, and pigs go under the knife.” The latter remained intact and even earned. But this is before the first sharp reverse movement of the market. “Bear rallies” can turn into collapses suddenly and swiftly.

And the bears themselves, having thrown off some of the “shorts”, are not ready to give up the rest yet. They believe that the Fed’s rate (currently 3.75-4%) will end up much higher anyway, which will be detrimental to stocks but good for short positions.

“We wouldn’t be surprised if we see some short-term continuation of stock gains,” Chris Senek, chief investment strategist at Wolfe Research, told Bloomberg yesterday. “However, today’s inflation data will not change our view that the Fed will eventually raise rates to 5-6% and the associated recession will come next year.”

Mishustin urged to accelerate the rejection of the dollar in mutual settlements in the CIS space (October 28, 2022)

How to budget for advertising during times of instability (November 4, 2022)

Muscovites will be able to get to the MCD-1 station “Workers’ settlement” through the underground passage – Ovchinsky (November 1, 2022)

Putin: multipolarity is Europe’s only chance to restore its subjectivity (October 27, 2022)