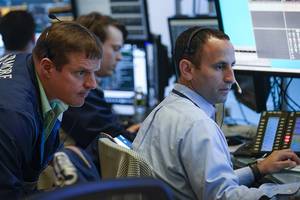 Yesterday, US indices continued to rebound, started on Friday. Oversold tech stocks didn’t lead the way, as they often did during this year’s bear rallies. Some of them (like Tesla) even rewrote 52-week lows. But the reasons for the rise were special.

Investors have been rebuilding their portfolios with growing confidence that in today’s midterm elections, Republicans will regain a majority in at least one, if not both, houses of Congress. The widely held belief is that this will be good news for bulls, both in stocks and bonds.

And the major US stock indexes ended the day in positive territory. The most traditional of them, the Dow Jones Industrial Average, gained the most at 1.31%. The S&P 500 was up 0.96% and the Nasdaq Composite was up 0.85%.

“The idea that the Republicans will take back the House of Representatives has caught on well in the market,” RBC Capital Markets strategist Lori Calvasina told CNBC yesterday. “I’m not saying it won’t be good for the stock, or we won’t have a few nice days, or it won’t provide some stability. But I think for the S&P 500 to really take off, they need to get the Senate back as well.”

Nevertheless, from the point of view of market statistics, the party composition of the US Congress does not matter that much. In the past hundred years, six months after the midterm elections, American stocks have still generally been higher than they were on the eve of the election. In the short term – today or tomorrow – growth also has some chances from this side.

According to Stock Trader’s Almanac, the midterm congressional day ended up 69% of the time, and the next day was up 83%. This is associated with the partial closing of hedges and the opening of other positions previously closed due to political uncertainty. But the final results are summed up later, so that the process of shaking up portfolios can be delayed.

And yet such statistics are more reminiscent of folk omens. For the near future of the US stock market, other figures will be more important – those that will become known only on Thursday. This is the rate of inflation in October.

Whatever the outcome of the election, the Fed’s monetary tightening in the near future should be more influenced by data on the speed of consumer price growth, rather than the alignment in Congress. Although investors, it must be said, hope that with a greater weight of Republicans in parliament, something will change in the views of Jerome Powell. In the meantime, the weight of bad data (about unexpectedly high inflation) will be higher for the market than neutral or good ones.

“Because we probably won’t have a definitive answer on the composition of Congress this week, Thursday’s CPI advance data will be very important,” Miller Tabak + Co., chief market strategist, wrote yesterday. Matt Mayley. “But even if we get better-than-expected inflation numbers, there is a high chance that they will only cause short-term gains in stocks. Shortly thereafter, the stock market should turn around again.”

Now analysts on average believe that the growth rate of consumer prices has decreased from 8.2% to 8%. But this year, out of 9 attempts, they guessed only once, and only once they predicted higher inflation than actually happened. So the statistics of Thursday does not cause much optimism among the bulls yet. Many simply stand back from the market or maintain a hedge.

“I’m not ready to take the risk of headlines,” David Reidy, founder of First Growth Capital LLC, told Bloomberg yesterday. “There is too much up in the air, especially with the election and the release of inflation data, for any sizable share of the funds to be involved in any sort of directional trading.”

The share of non-residents in sovereign Eurobonds of the Russian Federation fell to a three-year low (November 10, 2022)

The Board of Directors of Detsky Mir will consider the issue of transforming the network into a private company (November 7, 2022)

Igor Sechin: “Civilization algorithms have led to the development of other centers of influence” (October 27, 2022)