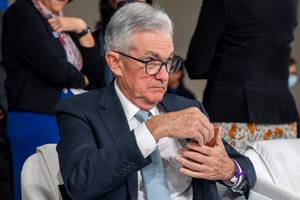 The two-day Fed meeting, which begins today, can be called political in a square. It will be relevant not only to monetary policy, but also to election policy. The fact is that the midterm elections to Congress will take place on November 8, and successes in the fight against inflation and the dynamics of the stock market are seriously reflected in the mood of the public going to vote.

If tomorrow’s rate hike will affect inflation, it won’t be soon. But the actions and rhetoric of the FRS can instantly affect the dynamics of stock indices. And the impact of this on voter decisions cannot be underestimated – according to the Fed itself, as of July 1, US households had invested $ 33 trillion in stocks.

At the beginning of the year, that figure was $42 trillion. But $9 trillion of wealth has vanished into thin air, lowering Democratic support as much as high gas station prices. For the third quarter, the decline should only widen, with the S&P 500 down 5.3% between July 1 and October 1, roughly equivalent to losing another $1.7 trillion. And all this is the merit of the Fed, which is tightening monetary policy in the fight against inflation.

Few doubt that tomorrow the rate will be raised by 75 basis points to 3.75-4%. According to the CME FedWatch Tool, the derivatives market now estimates the probability of this at 88%.

The growing spread of US rates with the EU, China and Japan has been the main reason for the strength of the dollar this year. And yesterday, recouping the approaching increase in the gap by 75 bp, the dollar index (rate against a basket of 6 leading currencies) jumped by 0.8% to 111.54). For the euro, this meant a fall to $0.9873.

But despite such a predetermined decision by the Fed, there is much more intrigue in this meeting than it might seem. And it was to her that the Dow Jones Industrial Average owed a rare series of six trading days in a row, closed in positive territory. Yesterday it was interrupted by its decline.

The fact is that the upcoming Fed meeting has already developed a reputation as a “reversal”. Many expect that it will discuss the slowdown in the tightening of monetary policy. No, stop raising the rate or increase it only by 50 bp. there is almost no waiting on the market, although, according to the CME FedWatch Tool, the probability of a slowdown tomorrow is not zero – 12%. But it is expected that Fed Chairman Jerome Powell will somehow hint that there will be a 50 bp rise in December. After that, as the markets believe, there will be two increases of 25 bp. and in March the rate will finally stop at 4.75-5%.

The reason for such detailed rumors was an article in the WSJ the Friday before last, which was considered a targeted leak from the Fed. Then the long-term growth of the Dow Jones Industrial Average started, and analysts began to develop more or less “pigeon” scenarios for the next and subsequent meetings of the Fed.

“Wednesday’s announcement will be critical to future market expectations,” LPL Financial’s Quincy Crosby told CNBC yesterday. “Chair Jerome Powell will have a very difficult time with a series of press questions and answers. He should try to fine-tune his expressions and build his answers very accurately, as if he were walking on a tightrope of money.

Yesterday, trading was closed with a 0.4% decline in the Dow Jones Industrial Average. Other US indices also fell.

“Stocks are taking a breather after a big bounce last week,” said Ryan Detrick, chief market strategist at Carson Group. “Given a particularly important Fed meeting and the upcoming interest rate decision on Wednesday, this pause makes even more internal sense than it usually does after a long rise.”

Shares of metallurgists went up on anticipation of the state defense order (October 28, 2022)

There have been major changes in US LPG exports (November 3, 2022)