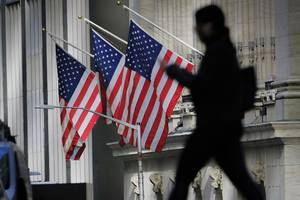 Despite the persistent rumors that the Fed intends to subtly hint today at an imminent slowdown in the pace of rate hikes, the market yesterday was in a “good news – bad news” mode. The reason for the market gossip was the October WSJ article that on November 2, after adding 75 bp to the rate, officials will discuss its increase in December by only 50 bp. But this action won back last week.

And the economic advances that could support the hawks at the Fed began to cause market falls again. And the statistics, indicating the approach of a recession, strengthening the position of the “doves”, led to its growth.

So yesterday, the indices fell on data that the number of vacancies in the US unexpectedly increased by 437 thousand to 10.7 million. Economists polled by Reuters had forecast only 10.0 million. And by the end of the day, the Dow Jones Industrial Average fell by 0 .24%, the S&P 500 was up 0.41%, and the Nasdaq Composite was up 0.89%.

Notably, the S&P 500 started the day up 1.03%. This is the 26th time this year that a rise or fall of more than 1% has been completely wiped out on the same day – the most since the 2008 global financial crisis.

“Hopes for a dovish reversal by the Fed are misplaced, judging by today’s job stats,” Ronald Temple, head of U.S. equities at Lazard Asset Management, told Bloomberg. “Despite other data suggesting a slowdown in the economy, jobs—along with rising nonfarm payrolls—suggest that the Fed is far from declaring it has beaten inflation and lifted its foot on the economic brake.”

The mood was not added to the market by former Treasury Secretary Larry Summers, who wrote in a microblog that the growing chorus of calls for a suspension of the rate hike are greatly mistaken. He noted that this is the opinion of economists, who proved their incompetence in the field of inflation even during the covid period, and suggested that the Fed stick to its course, focusing on current data.

In general, Jerome Powell will be listened to carefully today. And if the first part of his speech was written in advance and, perhaps, even rehearsed, then it is more difficult with subsequent answers to questions. This is where he may well go wrong.

Anything that will boost expectations of a 50 bp rate hike in December. p. or less, will push stock and bond prices higher. And anything that leaves investors with the impression that another 75bp increase is possible will do the opposite.

And much here will depend not on the information that Jerome Powell would like to convey to the public, but on his acting gift and understanding of the mood of the audience. With this, he is not doing very well – on the conscience of the chairman of the Fed there are “bear rallies”, inspired by him by pure chance.

But whatever he says, misperceptions are almost inevitable. After all, the predilection with which Jerome Powell’s talkativeness, tone of voice, and even facial expressions will be judged today is more befitting adepts of psychoanalysis, rather than financial analysts.

“The most important thing will be how much it tells us about December,” Jake Jolly, senior investment strategist at BNY Mellon, quoted MarketWatch yesterday. If Chairman Powell is relatively silent and not inclined to discuss his thoughts, it will seem ‘hawkish’ to me. This means that the decision will remain very dependent on the data.”

Accordingly, the movement of the markets will be quite randomly correlated with the message that Powell plans to convey to them. In this sense, it would be more practical for the chairman of the Fed to communicate with the public by correspondence. Here are just a sudden transition to such a practice would cause a new shaft of rumors.

The Central Bank proposed to change the conditions for insurance of bank cards and household appliances (November 7, 2022)

The Ministry of Energy of Turkey announced the beginning of a partial payment for Russian gas in rubles (November 8, 2022)