The Salyut production complex of the United Engine Corporation (UEC), which is part of Rostec, will launch the production of PD-14 engine components in 2023, which will be installed on new domestic medium-haul MS-21-310 aircraft. The enterprise is responsible for the manufacture of the central drive, the shafting and the gearbox of the units.

Today, Salyut PC is mastering modern equipment, as well as technologies necessary to start mass production of these transmission units. The corresponding statement at the conference “PD-14 Engine for Civil Aviation”, held at the site of the International Engine Building Forum – 2022, was stated by the chief engineer of the enterprise Yury Nurtdinov.

A new competence center will appear in Moscow

“For the manufacture of components for the PD-14 engine, the most modern technologies are used: thin-walled casting, additive and robotic technologies. So, for example, thanks to their use, the thickness of the walls of the case was reduced by 25%, the metal consumption of stampings was reduced to 30%, and the labor intensity of manufacturing the assembly by 25-35%, while improving the performance of the products, ”the press service of the Group of Companies quotes him as saying. Rostec.

At the same time, the requirements for the quality of processing make it impossible to use the equipment of the previous generation. Therefore, in order to obtain high quality products, Salyut uses modern five-coordinate machining centers and precision equipment with numerical control. For the compact placement of these production lines in the future, the company is building a separate building. The creation of a competence center on its basis is planned to be completed by 2025. And by 2030, the enterprise should reach the level of mass production.

It is expected that its capacity will make it possible to produce up to 1000 engine kits per year for more than 30 UEC products. The competence center is designed for a staff of about a thousand specialists. To create the center, Salyut is equipped with modern high-tech equipment, a significant part of which, however, is already involved in the implementation of the production program.

“The UEC adopted the program “Transformation of the Industrial Model” or “TrIM”, which involved the creation of competence centers. These centers should meet the needs of the corporation as a whole for certain types of components, technological processes, and so on. Competence centers for casting and metalworking were created, and Salyut, for example, got the production of transmissions, ”Oleg Panteleev, executive director and head of the analytical service of the AviaPort industry agency, told Expert.

He drew attention to the fact that when forming the TRIM program, a large-scale work was carried out to determine the current level of capabilities of each enterprise included in the corporation in each specific area of ​​applied tasks.

“It was determined that Salyut has, within the UEC, perhaps the best base, capabilities and competencies, both in terms of technical equipment and in terms of trained personnel, for the production of relevant products. Salyut has historically had a large amount of modern and advanced gear cutting equipment, and at the same time, the enterprise has the potential to develop on a scale that allows it to fulfill orders in the interests of other enterprises and JEC programs. As a result, Salyut expands its capabilities and integrates into production cooperation, both for the PD-14 engine and for some other engines, too, ”the expert concluded.

PD-14 has become a development driver for the industry

Recall that the PD-14 is a Russian turbojet two-circuit twin-shaft engine that operates without mixing the flows of the outer and inner circuits and is equipped with a reverser, as well as an effective noise suppression system, including chevrons. The product was certified in 2018, and its production started in March 2020 at the facilities of UEC-Perm Motors JSC. Within the framework of cooperation, many factories of the corporation participate in this process. The production of transmission units is, of course, an extremely important link in the entire chain. 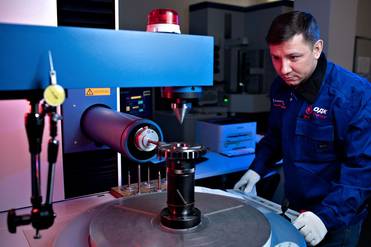 By the way, after receiving the basic certificate of the PD-14 type, work was carried out to increase its resources. This will provide opportunities for more efficient commercial operation of aircraft equipped with this power plant, which will replace the Pratt & Whitney engines installed on the first MS-21s.

“The creation of the PD-14 is a breakthrough in the Russian engine industry. For the first time in many years, a new, completely Russian engine has appeared. This project involves dozens of enterprises in related industries, metallurgical and engine-building plants, electronics manufacturers, the Russian Academy of Sciences, research institutes, and universities. The creation of PD-14 stimulated the emergence of a generation of specialists at these enterprises who received not just interesting jobs, but experience in creating modern competitive products, ”says Alexander Inozemtsev, Deputy Director General of the UEC. It can be added that the structure of the after-sales service of the aircraft engine, the organization of its maintenance and the training of airline specialists has already been developed and presented.

Currently, testing of the second flight model MS-21 with PD-14 is in full swing. The first deliveries of the aircraft to the airline are scheduled for 2023-2024. In 2023-2030, Aeroflot, according to the agreement signed by the United Aircraft Corporation, should receive 210 aircraft on a lease basis. In order to implement the ambitious plans of Rostec and UAC for the mass production of fully imported aircraft of this type in the amount of 72 units per year by 2029, it is necessary that the work of all industries, including, of course, engine-building, be debugged by 100 in the short term. %.

The Central Bank assessed the consequences of the outflow of household funds from deposits (November 8, 2022)

The yuan began to displace world currencies from currency pairs with the dollar (October 28, 2022)

A sports complex in the Basmanny district of Moscow will be built under the city preferential program (November 11, 2022)