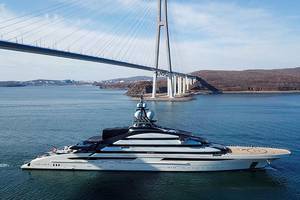 To solve these problems, expand the tourist offer, and at the same time help investors and business in the tourism industry, master planning of the macro-region “Far East” can.

The outflow of Russian tourists from abroad had a positive impact on the occupancy of domestic resorts: as Minister of Economic Development Maxim Reshetnikov noted at the last Eastern Economic Forum, approximately 32 million people did not go on vacation abroad in 2022. According to him, this number of travelers creates unrealized demand, which can be met thanks to the possibilities of domestic tourism, and one of these destinations is the Far East.

Most travelers come here “for a dream” – these are the data of surveys conducted in the process of developing a master plan for the tourist macro-region “Far East”, which includes the territories of the Primorsky and Kamchatka Territories and the Sakhalin Region. People are attracted by the ocean rich in seafood, unique nature, geothermal springs, ski slopes and more. All this, along with a rich ethnographic heritage, proximity to the countries of the Asia-Pacific region and special economic zones, allows the development of almost any type of tourism here: health, educational, sports, beach, extreme, gastronomic, cruise, entertainment and others.

At the same time, the tourism industry in Primorye, Sakhalin and Kamchatka – the most popular destinations for trips to the Far East – received a boost a few years ago with the onset of the pandemic and the closure of borders around the world.

Among all tourist trips to the macroregion, 80% of trips now fall on Primorsky Krai, the remaining 20% ​​are divided between Kamchatka and Sakhalin almost equally. This difference is due to the fact that Vladivostok Airport is a transport hub capable of receiving up to 3 million passengers annually, and the total number of direct flights to the capital of Primorye from other regions of the country. A study conducted by the ProGorod project office (VEB.RF Group) shows that people are ready for long flights in order to be able to see Primorye, Kamchatka or Sakhalin. Potential tourists are constrained by the inaccessibility of the beauties of the Kamchatka Territory and the Sakhalin Region – the transport network in the regions is underdeveloped, and many of the most attractive tourist locations can only be reached by helicopter or special vehicles. Also limiting factors now are the insufficiently diversified tourist offer, underdeveloped infrastructure and the overall cost of the trip.

The analysis carried out as part of the development of a tourism master plan helped to define the portrait of a traveler. For example, for Kamchatka, these are, in the vast majority (87%), singles, mostly men, without a couple or children. Thanks to the master plan, the creation of a modern multifunctional tourism and transport infrastructure and the formation of new proposals will expand the target audiences of demand, including through families with children, which will also have a positive impact on the economic performance of the industry.

Now it is difficult for tourists in the Far East to accommodate in such a way that the price / quality ratio is adequate: out of 40.7 thousand hotel rooms, only 10% meet modern quality standards. This is partly why only a third of travelers stay in hotels, others stay with acquaintances, travel “savages” in tents or use the services of uncertified accommodation facilities (the monitored share of such a “gray” market is estimated at 12%, but in reality it can be 2-3 times higher ).

It is not easy to overcome this challenge: more than 80% of the area of ​​the macro-region is made up of specially protected natural areas (SPNA), for which there are serious restrictions on the creation of infrastructure that make it difficult to build not only hotel complexes, but even the organization of hiking trails.

Master Plan comes to the rescue

Today, the macro-region “Far East” faces a complex task: to develop a competitive tourist offer, modernize the tourist and related infrastructure, attract investors and, at the same time, take care of preserving the unique nature. And such work is already underway thanks to tourism master planning – a new tool for the development of the travel industry, which allows you to most effectively analyze the potential of the territory, prepare measures for its development, and develop investment lots for business.

Today, the development of the master plan for the Far East macroregion is being carried out by the project office of ProGorod LLC (part of the VEB.RF group) as part of the Tourism and Hospitality Industry national project. The development of the project is carried out in four stages. The first is a comprehensive study of the entire set of data: statistics and spatial data, opinion polls, big data analytics, etc. Further, strategic design solutions are being developed for the entire macro-region, including forecasting the tourist flow and the number of rooms, as well as the architectural code and marketing of tourist destinations. At the third stage, the concepts of all-season tourism infrastructure complexes are being developed. The final stage is the formation of a roadmap for the implementation of the project and the preparation of proposals for amending the legislation.

By 2035, the activities of the master plan provide for an increase in the tourist flow to the macroregion by half – up to 6.7 million trips per year, and the number of rooms – by 1.5 times – up to more than 70 thousand rooms. In addition, it provides for the modernization and construction of transport and engineering infrastructure, as well as the creation of 12 new all-season resorts – 4 on the territory of each subject participating in the project.

The tourist clusters formed as a result of this work will not only become a new place of attraction for tourists, but will also increase the contribution of tourism to the gross regional product due to the synergistic effect, specialists of ProGorod LLC note.

We distribute the tourist flow – we take care of the economy

At the same time, master planning provides not only ways to increase the tourist flow, but also its more even distribution within the regions, the developers emphasize.

The development of concepts for 12 all-season resorts will make it possible to form a year-round tourist offer at various locations within the region. “For example, the planned resort in the village of Malki in Kamchatka is geothermal springs with the possibility of year-round recreation, it is in great demand,” says Ksenia Titova, head of the ProGorod project office. – Other resorts here – the village of Milkovo and Kozyrevsk – will become the base points for departure along the hiking routes of the Kamchatka Territory. The total number of rooms in all 12 resorts exceeds 2,000 rooms, which is ¼ of the entire planned capacity of hotels in the region.”

For each of the planned resorts, the master plan provides for the development of a functional model, volumetric solutions, basic technical and economic indicators, transport and engineering.

According to Ksenia Titova, a roadmap will be drawn up for the master plan with details at the macro-region level, indicating the timing and indicative cost of the activities.

Since tourist attractions, as well as all-season resorts, are distributed throughout the region, it is necessary first of all to ensure transport connectivity between them – that is, to build new roads and repair existing ones.

The master plan “Far East” provides for the reconstruction of the road section “Milkovo – Klyuchi – Ust-Kamchatsk” – the main transport artery of the region, “Petropavlovsk-Kamchatsky – Nalychevo” – for access to the coast, as well as “Krapivnaya – Esso” – an access road to Kamchatka Switzerland. In addition, it is planned to transport connect the main tourist locations of the home group of volcanoes of Petropavlovsk-Kamchatsky – “Thermal – Vilyuchinskaya Bay – Mutnovsky Volcano”.

At the same time, plans to improve the road infrastructure will become a signal for investors, who will be allowed to build a number of rooms and entertainment infrastructure by roads. According to the Far East Development Corporation, tourism projects in the macro-region are already being implemented in the Advanced Development Territories (TOP), as well as within the framework of the Free Port of Vladivostok (FPV) regime.

And these initiatives are implemented using various tools to support investors and businesses. For example, within the framework of a special zone – the Free Port of Vladivostok – there is a simplified tax regime that provides for many preferences for residents: from a 5% income tax (0% to the federal budget and no more than 5% to the regional one), to 0% land tax within five years, an accelerated VAT refund procedure (10 days) and others.

In addition, the state allocates funds to support investors who invest in the reconstruction of airports in the Far East, the construction of landing sites for small aircraft, and the development of rail and water transport.

According to experts, the support measures being taken resonate with business representatives. “Investors and banks see that support is coming, and they are working more actively: 8 rubles of bank financing go to 1 ruble of budget funds,” Anton Perin, senior managing banker of the VEB.RF business block, specified at the Eastern Economic Forum in September.

In the future, the facilities being built with the help of investors will provide a synergistic effect for the development of the entire macro-region and the growth of its economy. Already, the contribution of tourism to GRP (gross regional product) per capita, for example, in Primorsky Krai exceeds the national average (12.7 thousand rubles) and amounts to 14.7 thousand rubles.
With the doubling of the tourist flow, the share of those employed in tourism in Kamchatka (now 5.2% of the population) and Primorye (5.6% of the population) will also increase, which, however, already today exceeds the national average (3.5% of the population).

“We plan to achieve this indicator by improving the service (leveling the price / quality ratio) and developing the connectivity of the regions both within the federal district and with the western part of Russia. The formation of a market for high-quality room stock by 2035 is expected through the construction of about 30,000 rooms,” says Ksenia Titova.
Moreover, both capital hotels and modular prefabricated hotels will be built – it all depends on the characteristics of the landscape and the restrictions of a particular territory. For the construction of the latter, by the way, there is also a new measure of state support. As noted at the WEF, in 2021, out of the 4 billion rubles allocated for the entire country, the Far East received 700 million rubles.

At the end of this year, the project and the roadmap for its implementation will be submitted to the Government. All activities proposed in the master plan will be divided into three phases – 2025, 2030 and 2035.

In case of successful implementation of the project roadmap activities, with the direct participation of the regions themselves, by 2035 a qualitative change in the transport and tourism infrastructure, as well as the number of rooms, is predicted in the Far East. All this will provide stable conditions for the growth of tourist traffic and investments, and after them – the development of business and the entire macro-region, emphasizes ProGorod LLC.