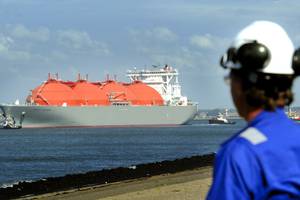 In October, the situation with the export of American liquefied natural gas (LNG) has undergone a number of significant changes. Firstly, according to Reuters, it has declined, and secondly, buyers from Asia, as follows from data from Refinitiv Eikon, have again begun to take precedence over competitors from Europe. The reason for the gradual reversal of US LNG flows is not only the sharp drop in gas prices in the Old World in October, but also the accident on the gas pipeline in Malaysia.

Europe “generously” allowed traders from Asia to prepare for the coming winter. For the first time in at least six months, Europeans have stopped traveling the world in search of free gas. Gas prices on the continent fell by 40% in October as underground gas storages (UGS) are already over 90% full. In addition, the cold is clearly not in a hurry to Europe yet, there is abnormally warm weather.

In Asia, the situation is different. A gas leak on a gas pipeline in Malaysia forced the Malayan oil and gas company Petronas to declare force majeure and temporarily stop its supplies. As a result, Malay energy customers had to urgently look for a replacement for their gas. Malaysia last year was the second largest supplier of “blue fuel” to the Land of the Rising Sun.

In total, 88 tankers with 6.27 million tons of liquefied gas set sail from American ports in October. This is 50 thousand tons less than in the previous month.

Most of them, according to data from companies that monitor the movement of ships, headed for Europe. However, the share of Asia has increased markedly: from 19% in September to 24% in October. By the way, two ships with American LNG went to South America and the Caribbean last month less than in September.

Meanwhile, the price of gas at the Dutch hub fell to $27 per million BTUs, a four-month low.

“Europe has collected enough gas to get through the winter if it is not very cold,” Rystad Energy analyst Nicoline Bromander wrote last week in a research note.

There are now a dozen LNG carriers in the bay of Cadiz waiting for higher gas prices. European LNG plants, which are returning liquefied natural gas to its natural gaseous form, are now operating at full capacity.

After February 24, US LNG producers sharply increased their exports to Europe, but the “state of emergency” at LNG terminals and, first of all, a strong fire in June at the second largest LNG terminal in the US, Freeport, limited exports. This LNG plant in Texas has a capacity of 59.4 million m³/d. The operator plans to partially resume its work in November.

The closure of the Freeport LNG terminal has not only affected Europeans. Among the victims and the largest buyer of LNG in Japan JERA. This company, by the way, last week complained of losses in the amount of $751 million, mainly due to rising gas prices. Maryland’s third LNG producer, Cove Point LNG, also returned to operations in October after a scheduled inspection, boosting U.S. gas exports by 19.8 million m³/d.

As of the end of last week, 94.5 billion m³ of gas were pumped into the UGS facilities.

Sony Pictures will continue to operate in Russia under a different name (November 8, 2022)

The Central Bank called the reason for the growth of international reserves (November 3, 2022)