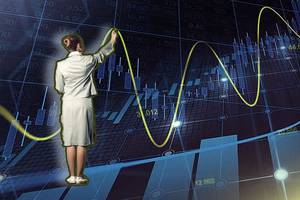 The volume of the National Wealth Fund of Russia (NWF) as of November 1 amounted to 11.374 trillion rubles, or 8.5% of GDP, projected for 2022. A month earlier, it totaled 10.79 trillion rubles, or 8.1% of GDP, according to the website of the Ministry of Finance of the Russian Federation. At the same time, in October, part of the funds of the National Welfare Fund in euros, pounds sterling and yen was sold for a total of 260 billion rubles and credited to the budget to cover its deficit.

In October, 5 billion rubles from the fund were placed in bonds of the Housing and Public Utilities Reform Assistance Fund (in the amount of 5,031,235 bonds at a price of 1,000 rubles) in order to finance a program to finance the construction, reconstruction and modernization of housing and communal services infrastructure facilities.

In addition, part of the NWF funds on accounts with the Bank of Russia (3.455 billion euros, 375 million pounds sterling and 63.573 billion Japanese yen) were sold for a total of 259.736 billion rubles, and the proceeds were credited to the budget in order to finance its deficit.

The placement of NWF funds in foreign currency accounts with the Central Bank for the period from December 15 to October 31 showed a negative financial result (-$115.8 million or -7.1 billion rubles). The exchange rate difference on the assets of the National Welfare Fund denominated in foreign currency and the revaluation of the cost of gold from January 1 to October 31 in the aggregate amounted to a negative value of -2.67 trillion rubles.

The Ministry of Finance noted that in October the federal budget received income from the placement of NWF funds on a subordinated deposit with VTB Bank in the amount of 3.93 billion rubles, on deposits with VEB.RF – in the amount of 1.67 billion rubles; from placement in securities of Russian issuers related to the implementation of self-sustaining infrastructure projects – another 530 million rubles. The total income from the placement of the fund’s funds in permitted financial assets, excluding funds on accounts with the Central Bank, in 2022 amounted to 40.4 billion rubles, or $636.3 million.

Vice Mayor Efimov: the volume of SME contracts on the Supplier Portal has exceeded 36 billion rubles since the beginning of the year (October 27, 2022)