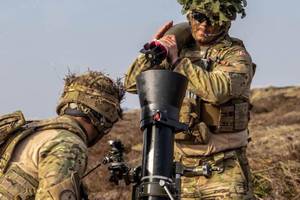 Officials from the US and European countries do not believe in the imminent start of peace talks between Moscow and Kyiv.

As the New York Times writes, citing its sources, a number of high-ranking American and European officials believe that “serious peace negotiations between Ukraine and the Russian Federation are unlikely in the near future” and military actions will continue.

According to Washington, both sides – both Moscow and Kyiv – are allegedly convinced that the continuation of hostilities at this stage will strengthen their positions in the negotiations.

In addition, officials in the US and Europe “recognize that it is difficult to imagine any joint terms for resolving the conflict that Moscow and Kyiv would agree to.

Therefore, the administration of the current head of the White House, Joe Biden, has to “walk the fine line” in maintaining a balance: on the one hand, the US president assures Ukraine of further support, on the other hand, he is faced with pressure within countries, where people are increasingly demanding to explain “what the war may end.

At the same time, the interlocutors of the publication say that the personal position of Vladimir Zelensky does not differ from the public one and consists in the fact that Kyiv must return all the territories that it controlled until 2014.

“The President of Ukraine is not interested in exchanging any territory to end the war. Some European officials are privately questioning whether this stance is sound, while others speak out in support of it.

As before wrote “Expert”, Dean of the Faculty of Social Sciences and Mass Communications of the Financial University under the Government of the Russian Federation, Candidate of Political Sciences Alexander Shatilov named the condition for reaching a compromise between Russia and Ukraine. In his opinion, the conclusion of a truce is possible if Kyiv comes to terms with the loss of part of its territories.

Vladimir Efimov: a production facility for 230 jobs will be built in the southeast of Moscow (November 11, 2022)

The head of the Central Bank suggested that businesses find another source of “long money” instead of banks (November 8, 2022)