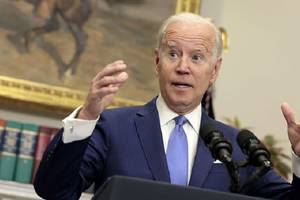 The United States is concerned about the “obsession” of the administration of the head of the White House, Joe Biden, in Ukraine.

As the Global Times writes, many are frightened that the president and his inner circle have become the main beneficiaries of the conflict.
“The White House is trying to use the current situation in Ukraine as an opportunity to discipline European allies, strengthen and expand NATO, and explore new opportunities for the US defense industry,” the publication says.

At the same time, the authors of the article note that fixation on Ukraine prevented Biden from focusing on what is really important for the country – internal problems such as inflation, abortion, immigration, crime and climate change.

In addition, it is emphasized that Washington has already spent more than $ 55 billion on helping Ukraine. At the same time, many newly elected Republicans consider this distribution of military efforts unfair, since the Ukrainian crisis is a problem for Europe, not the United States.

“They are likely to require significant changes in burden-sharing between Washington and the EU. The pressure on Europe will only increase as the fighting in Ukraine could continue into 2023.

Putin announced the need to find “key points” to end the conflict in Karabakh (October 31, 2022)

“Units of the Armed Forces of Ukraine are thrown back to their original positions”: the Ministry of Defense announced the success of the special operation (November 26, 2022)