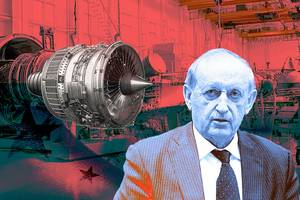 Chinese businessman Wang Jing, who is a key shareholder of Beijing Skyrizon and Beijing Xinwei Technology Group, which owns a controlling stake in the Ukrainian company Motor Sich, issued an official statement in which he strongly protested against the nationalization of the company’s assets.

“We strongly oppose the shameless behavior of the state of Ukraine regarding the politicization of normal business conduct, the forced nationalization of Motor Sich, and the unreasonable plunder of the legitimate rights and interests of Chinese investors. We will continue to actively communicate with all parties in various ways and will never give up the fight to protect our rights legally, using all legal methods, in order to constantly, strongly and unconditionally protect all our legal rights, ”the statement emphasizes.

Nationalization on the anniversary of the Great October Revolution

Such a strong reaction from the representative of Chinese investors of the Ukrainian engine-building enterprise was caused by the announcement on November 7 by Volodymyr Zelensky about the seizure of the assets of PJSC Motor Sich and several other large private companies in favor of the Ministry of Defense of Ukraine. Incidentally, in addition to representatives of Chinese business, the odious oligarch Igor Kolomoisky also suffered as a result of these actions.

Coincidence or not, but the Ukrainian president announced the nationalization of several flagships of the Zhovto-Blakyt industry on the next anniversary of the Great October Socialist Revolution, which in itself is quite piquant for a country that has undergone decommunization. In addition, there are a few more curious points regarding, in this context, specifically the Zaporozhye engine-building giant, which in recent years has been steadily sliding into the status of a “dwarf” due to the lack of a sufficient number of orders for manufactured products.

Firstly, the nationalization of the Zaporozhye Motor Sich is being de facto carried out by Zelensky for the second time. The first one was in 2021. It was preceded by a deal to sell assets to the aforementioned Chinese companies, the subsequent seizure of assets and the almost simultaneous imposition of sanctions against Skyrizon by Ukraine and the United States. Investors from the Middle Kingdom then, in order not to remain in debt in every sense, filed a lawsuit in the amount of $ 4.5 billion to the arbitration court in The Hague, where their chances of winning the process seemed high.

Secondly, at the end of October of this year, Vyacheslav Boguslaev, the honorary president of Motor Sich, who was actually the co-owner and head of the company, was arrested on suspicion of collaborationist activities and complicity with Russia as an aggressor state. It was he, being a resident of the Ukrainian Forbes list and the holder of the title of Hero of Ukraine, in his own words, who initiated the sale of a controlling stake in the enterprise to industrialists from China.

collaborator with a motor

The accusations against the “man with a motor”, as Vyacheslav Boguslayev was sometimes called, are based on a recording of his telephone conversations, during one of which he allegedly told an unidentified interlocutor that he refers to missile attacks inflicted several months ago by the Russian army on the shops ” Motor Sich, where engines for aircraft of the Ukrainian Air Force were repaired and Neptune anti-ship missiles were assembled, “with understanding.”

In addition, the SBU stated that it has information about the supply of PJSC Motor Sich through several Middle Eastern, European and East Asian intermediary firms of military goods for Russian attack aircraft (Mi-8 Sapsan, Ka-52 Alligator, Mi -28 “Night hunter”). During the JMD, the Ukrainian side, according to its assurances, shot down several machines of these types and they found engines of the Zaporozhye plant.

True, it is worth noting here that until 2014 these engines were supplied to the Russian Federation quite legally, and the program for their import substitution was launched by the Russian state corporation Rostec even before the second Maidan and the return of Crimea. One of the reasons for this decision was dissatisfaction with the quality of power units, which often failed ahead of schedule due to too rapid wear.

The successful completion of the import substitution of the “hearts” of combat helicopters and the complete cessation of cooperation with Motor Sich immediately after 2014 and Rostec, and Deputy Prime Minister Yury Borisov, who oversaw the defense industry before his transfer to work at Roscosmos, officially announced more than once. And top managers from Zaporozhye, who unofficially visited the MAKS air show in 2015 in the hope of agreeing on at least some kind of semi-legal cooperation between Russian aircraft manufacturers and a Ukrainian enterprise that was catastrophically losing operating profit, returned empty-handed to their disappointment. It was then that the “Chinese option” began to be worked out, which by 2017 resulted in the beginning of official negotiations, and a couple of years later, in a deal that the Kyiv regime is now trying to terminate using raider methods.

In general, the removal from the post of the head of an aviation enterprise, accompanied by accusations of treason, is not some kind of new practice in Ukraine. 8 years ago, in exactly the same style as Vyacheslav Boguslayev is now, the general director of UkSATSE (air navigation service provider) Yuriy Cherednichenko was accused of treason.

In both cases, the authorities staged “mask shows” with the involvement of special forces in the arrests and searches. Both then and now, support for the disgraced leaders was expressed by the collectives of their enterprises, which, however, did not save top managers from repression. As a result, at the suggestion of the then Prime Minister Arseniy Yatsenyuk, a protege of the latter was placed in the chair of Yuri Cherednichenko, who, naturally, after another change of power in Ukraine, was convicted of financial fraud and also removed.

Today, against the backdrop of the ongoing special operation behind this whole story with Motor Sich, the star-striped ears of Uncle Sam openly stick out, more than ever interested in the fact that neither the Chinese nor Russia get the Zaporizhzhya enterprise (and neither in monetary terms according to the court, nor purely physical). Accordingly, the interests of Zelensky and Co. and their overseas bosses coincide 100%.

Kyiv seems to be counting on the confession of Vyacheslav Boguslayev, which can be sent to The Hague and avoid payments on the lawsuit of Chinese investors who do not intend to back down. At the same time, as a motive for self-talk, the 83-year-old top manager is offered the opportunity to avoid real time by exchanging for officers and soldiers of the Armed Forces of Ukraine who are in Russian captivity, as was the case with Viktor Medvedchuk. Tellingly, it is this option that has already been talked about in the media in the “Square”.

“Sich” can be “calibrated” into a brick

It is worth noting that after the successful end of hostilities, the Ukrainian “servants of the people” may be preparing to denationalize Motor Sich, taking it from the defense department and transferring it to a new “correct” owner, affiliated with them and agreed with the Washington curators. However, there are several weighty “buts” here at once.

For example, Vyacheslav Boguslaev will take and not give the necessary evidence, which portends his behavior at the court to determine the measure of restraint, during which he called his detention a misunderstanding. In turn, the Russian side may well refuse to exchange it for one reason or another.

At the same time, being under the jurisdiction of the Ukrainian Ministry of Defense, the Zaporozhye plant itself finally becomes an important military target and runs the risk of being so “calibrated” that there will simply be nothing to transfer to the new owner. And the likelihood of the city of Zaporizhia, along with the entire “Sich” under the control of the Russian army, is also present. After all, no one canceled the achievement of the declared goals of the special operation to demilitarize and denazify Ukraine.

Export of Russian LNG in October came close to a record (November 2, 2022)

The Council of the European Union equated the circumvention of sanctions against Russia with terrorism and human trafficking (November 28, 2022)