“Goat” is really old. Its history began in 1956 with the filing and money of the military.

Today it may seem like a fairy tale, but it was conceived – read carefully! – floating, with independent suspension and rear engine. However, it soon became clear that fellow officers needed a rear platform for boxes with shells, provisions and containers, you know what, and amphibiousness is unprincipled. As for the independent suspension, it became clear that it is bad in terms of survivability and does not provide a ground clearance of 400 mm, as the military wanted (later they, however, agreed to 300), and the experience of the American “colleague”, the Ford M151, showed other shortcomings.

But the fact that the time has come to change the well-deserved GAZ-69 (already then, after its predecessor GAZ-67, nicknamed the “Goat” – for the manner of riding on gullies because of the rigid, sharpened for carrying a mortar and transporting shells, suspension and a short base ), to a more modern “Ivan-jeep”, the military had no doubt. The old car did not suit them either with cross-country ability, or with interior space, or with power and dynamic characteristics, or with stability when driving on roads. And therefore, the military liked the new promising SUV, in which all these shortcomings were, if not brilliantly, but eliminated. Even despite the fact that being 5.5 centimeters wider than its predecessor, the new “Kozel” could no longer fit in the cargo compartment of the Mi-4 helicopter – the Mi-8 was already replacing the “four”, completing the tests. And the 469th entered it easily. 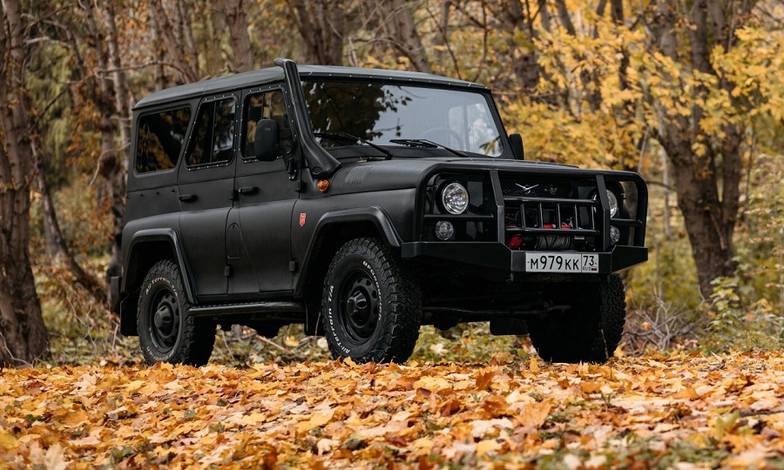 Everything would be fine, but neither the Minavtoprom, nor even the State Planning Commission, had anything to do with the novelty. Having passed the tests and recommended for production in December 1964, the car went to promising and exhibition ones for a long time. Neither the “stuffing” of a note about the novelty in the British Motor magazine, nor the petitions to the Central Committee, with which the designers, the plant management, the military and foreign traders from Autoexport tried to get things off the ground, nothing helped. But the skating of General Secretary Brezhnev, Minister of Defense Grechko and the head of the Supreme Council of Podgorny for hunting grounds in Zavidovo helped. As a result, the money was allocated, the plant was reconstructed, the Ulyanovsk Motor Plant was redesigned from stationary to automobile engines, and the car went into series – but only on December 15, 1972.

Moral obsolescence for the then off-road vehicles was not a big problem, as was the simplicity of the design. That’s just the quality of Ulyanovsk cars “limped” initially, and there was no need to talk about comfort.

The military, which accounted for a fifth of the entire order, insisted on the complete unification of vehicles for the army and the “citizen”, including the suspension, which allowed the transportation of boxes with shells to light artillery towed by the vehicle. Even the ignition lock had to be won back – in the Main Armored Directorate of the Ministry of Defense they demanded a flag switch. The military agreed only to release for the national economy a version with simplified (without wheel gears) axles and without shielded electrical equipment.

For many years, the main customers resisted electronic ignition as well – due to its failure in the event of a nuclear explosion (which, as you know, is accompanied by a wave of electromagnetic radiation). For the same reasons, they did not give the Ulyanovsk Automobile Plant money to produce a version with a hard top – only for small-scale production, up to a couple of dozen a year, for special versions and especially respected people – in particular, the writer Mikhail Sholokhov. Why is there a hard top – direction indicators and rear reflectors appeared on the UAZ-469 only in 1976, when the USSR had to comply with UNECE standards. 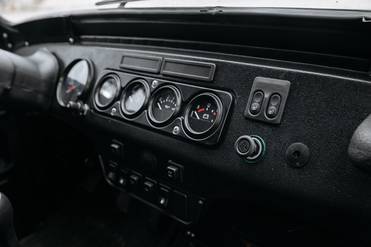 And so the “Goat” walked naked until the end of Soviet power.

But this is only in the USSR. In the 70s, the Italians, the Martorelli brothers, saw in the UAZ-469 the potential to build a Land Rover competitor on its basis. The cars were brought to the brothers’ small factory, disassembled, repainted, and obsolete units were replaced with new ones along the way. A capricious 80-horsepower gasoline engine – for a Peugeot diesel, a VM turbodiesel or for a gasoline, but “hot” two-liter FIAT (with a capacity of 76, 100 or 112 forces, respectively). Spartan seats for “passenger cars”, and a leatherette top for removable fiberglass.

Such cars also appeared in the USSR – they were brought by difficult citizens from long business trips abroad, causing the delight of the boys with the brilliance of “metallic”, wide chrome wheels and “kenguryatniks”. Ordinary citizens could only buy a decommissioned UAZ-469B on a collective farm or district committee (there was a direct ban on the sale of new new ones to private individuals) and restore it with spare parts stolen from car repair plants, Rayselkhoztekhnika warehouses and military units.

But there was no choice. With the roads in Russia then it was very bad. You won’t get far in an ordinary car, but the Niva is both small and impractical. The capabilities of the “passenger” conveyor of the Ulyanovsk Automobile Plant were not impressive: in 1987, almost the limit of 53 thousand were produced there, of which more than 10 thousand went to the military. “Niv”, not supplied to the army, was also released sparsely for a country with a population of almost a quarter of a billion – only 69 thousand.

Therefore, when at the end of the 80s the free sale of “goats” was allowed, they were snatched up in this form. And the factory workers, to the best of their meager capabilities, gradually modernized the car. First, in detail, and since the mid-90s, everything has been more thorough.

Small leaf springs at the rear and springs at the front, new axles, a redesigned engine, and then a new motor. Both disc brakes and power steering. And, of course, “civilian” seats, a safety steering column and belts, without which there was no way – even in a situation of general shortage.

To be frank, even later the flow of second-hand goods from over the hill did not particularly bother the Ulyanovsk residents. Used “Kruzaks”, “Blazers” and “Patrols” – not to mention the “Ranges” and “Gelends” – were incomparably more expensive, and dangerous: the times were by no means vegetarian, and such a car could be taken away along with the business, but and along with life.

But times have changed. Rotting and brittle “our brands” went up in price along with components (Russian and more and more often used imported ones) and the price-quality ratio gradually developed not in their favor. Moreover, the concept of an “as simple as the truth” all-terrain vehicle was inexorably fading into history, giving way to more user-friendly technology.

In general, the replacement of the car was asking for a long time. I must say that already in the 80s, a completely new family of cars was developed by order and with the money of the USSR Ministry of Defense. But the country with that name ended, and with it the budgets ended. They only managed to create a new body for the old chassis by AvtoVAZ. The “Hybrid” predictably came out raw and curvy, but subsequently, repeatedly modernized, gave life to the relatively popular UAZ Patriot today. However, that’s another story. 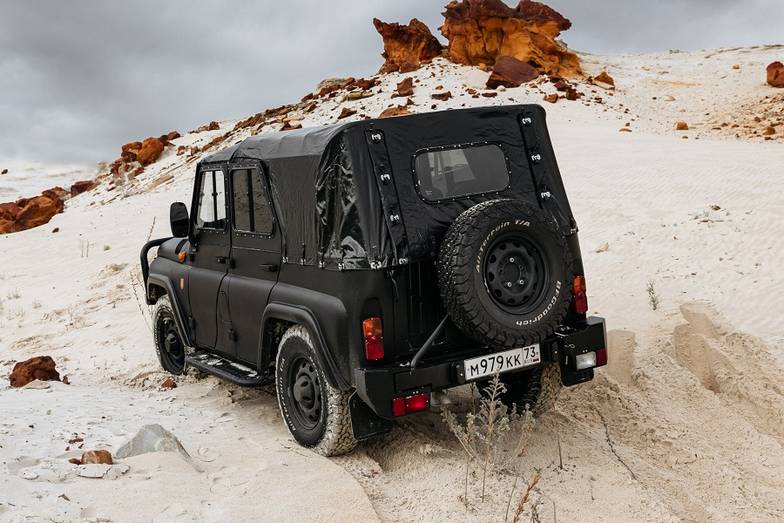 “Goat”, meanwhile, quietly lived out his life, renamed UAZ Hunter, but almost unchanged. In 2001, they sold 31 thousand, two years later 28, in 2009 – nine thousand. And then the car completely became limited-edition: from 2017 to 2021, sales fell from 1884 to 540 units. For comparison: even motorcycles “Ural” (once “folk” and nine times cheaper, and now exotic and more expensive alternative to the “Goat”) are produced four times more. But the equipment has paid for itself many times over, the components are unified with other models of the plant, the assembly line is still underloaded. So why not drive the old man through the assembly line for a week a year?

And they changed their minds about stopping the release of the veteran in Ulyanovsk. And at the same time, they remembered the round date – and decided to take advantage of the occasion and maintain interest in the brand in a way proven by Ulyanovsk residents – by releasing another limited special series.

The new old car is called “UAZ-469 Anniversary Series”. Ulyanovsk residents diligently avoid the name Hunter, and for good reason: the car, as it is fashionable to say now, is an import-substituting one. Without ABS, with a Euro-0 engine – of course, Russian, ZMZ-409. Bridges are also of a different, relatively fresh design, the Spicer type, but now without the optional Eaton lock. And the gearbox is Chinese, BAIC. The regular top is metal, but the kit includes a canvas one that you can put on your own – say, for the summer or to enhance the style. Another solution from the past is a folding tailgate instead of a “gate”: you can transport a long length and spread out a snack.

Also in the list of equipment for the hero of the day are metal bumpers, crankcase protection, a kenguryatnik, side steps, a snorkel, an electric winch and BFGoodrich AT tires of dimension 235 / 85R16. And in order not to peel off the sides of the “Goat” with branches and skewers, it was covered with a “mat in black” in the literal sense, that is, with a charcoal-colored Raptor ceramic coating with a matte effect. The interior is in the same color scheme: both the ceiling and the seats, upholstered in leatherette with double red stitching. Including – two additional seats in the trunk, as on the old 469s. 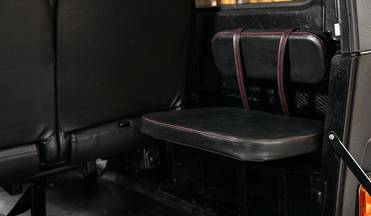 The anniversary of the car and the rarity of the performance will be hinted at by red nameplates on the sides and stern with the serial number of the instance. A total of 50 UAZ-469 Jubilee series will be produced at a price of 1.65 million apiece (250 thousand more than the base Hunter).

Note that the cars will not be delivered to dealerships. Those who wish are invited to buy a car directly at the factory, and as a bonus, get a free tour of the production, which was measured last months a year ago. But during this time, the owners of Sollers also changed (shares passed from Vadim Shvetsov to the top management of the company, the name of the real beneficiary is unknown), and, apparently, the plans for this are hopeless – or not? – an outdated 80-year-old factory and its slightly less old machines. Among which, “Kozel”, by the way, is far from the oldest: “Loaf” (nee UAZ-450, and now UAZ-SGR, “Old Cargo Row”) has been on the conveyor since 1958. But we will talk about the 65-year-old combat path of the “Loaf”, so nicknamed for the form, as well as for the convenience in it, as the people say, “thump”, we will talk in a year.

“Everything is in our hands”: Putin outlined key tasks in the defense industry and related industries (November 26, 2022)

Germany and France united in the fight against the United States (November 24, 2022)