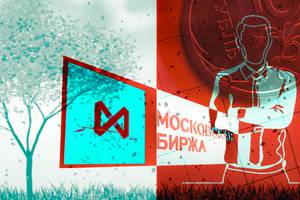 Trading on the Russian stock market today began very cheerfully: at the moment, the Moscow Exchange Index grew by almost a percent. However, there was not enough strength to continue the upward movement – investors are still afraid to build up long positions on the eve of a three-day weekend, and they are also afraid of any tomorrow’s surprises from the US Federal Reserve.

The attempts to take the market lower, observed in the lunch area, were also unsuccessful. As a result, at the end of the day, the Moscow Exchange Index rose by 0.26%.

The picture of the main “blue chips” does not change: investors pick up undervalued shares and fix speculative profits on those securities where they managed to earn at least something. Thus, shares of Norilsk Nickel and the Moscow Exchange closed in the red zone today, which showed a good result yesterday.

Among the growth leaders was the “usual” Surgutneftegaz. This could be explained by a 2% increase in oil, but the oil initiative was not supported by the main oil stocks – Rosneft and Lukoil. Moreover, it is these two securities – especially Lukoil because of its potentially huge dividend yield – that analysts recommend buying in the medium term.

“We still consider Lukoil one of the best dividend ideas in the sector. In the next 12 months, according to our forecast, dividends may amount to 838 rubles. with a yield of 18% (including recommended on Friday, October 28, payments from retained earnings in 2021), until the end of 2023 – 1,289 rubles. with a yield of 28, writes Alexey Kokin from Otkritie Investments in his review. — There is still a possibility that by the end of the year the company’s board of directors will also recommend distributing part of the profit for 2022. In our optimistic scenario, this is 40% of profit in 2022, or 301 rubles per share. At the same time, we believe that in the face of uncertainty associated with the upcoming EU embargo on December 5 and February 5, Lukoil will not rush to distribute this year’s profits.”

Prior to this, the record for the dividend yield of shares among the “blue chips” belonged to “Gazprom” – just over 26%. However, the paper was not in demand even on the eve of the cut-off of the register for dividend payments due to negative business prospects for the gas company.

I must say that Gazprom justifies the worst forecasts of analysts so far. Today it was reported that in the second half of October the volume of average daily gas exports to non-CIS countries reached its lowest value since the beginning of the year – 119 million cubic meters. In October, Gazprom’s exports fell by 34%, and production – by 32%. Since the beginning of the year, exports have fallen by 43%. It is not surprising that Gazprom’s shares almost always look worse than the market in recent days.

Lukoil, let alone Rosneft, has no such business problems. Even if they have to cut production, much of the loss, as analysts expect, will be offset by higher prices. It is the risks of reducing Russian production due to the introduction of an embargo on the purchase of Russian oil by the European Union and a price ceiling almost a month later that analysts explain the current rise in oil prices. In addition, from November, the OPEC + countries, according to the decision, will reduce production – the world market may begin to feel this already in the middle of the month. If the United States also stops oil interventions from strategic reserves, then oil may well reach $100 per barrel.

But so far, all these positive prospects for the shares of Lukoil and Rosneft are being ignored. Today, the paper fell by 0.2 and 0.7%, respectively. It is possible that their growth will begin at the beginning of next week, when the Fed’s decision will be won back.

High technologies look strong at the beginning of the week. Yesterday, Yandex was among the growth leaders, jumping almost 4%, and today it is quite logical that OZON and VK rushed to catch up with it, which grew by 3 and 2.5%, respectively. However, Yandex did not want to give up and went up another 1.7%.

In general, the picture of the Russian stock market is becoming uncertain. On the one hand, bullish sentiment prevails, and the market may well grow another 2 percent. On the other hand, investors are afraid of losing their earnings last week and are ready for immediate profit-taking as soon as there is a reason for this. Therefore, in the next two days until the weekend, the dynamics of the Moscow Exchange Index will largely be determined by the news.

The ruble exchange rate has strengthened by a third of a percent today. The dollar-ruble pair came close to technical support 61, from which, as has repeatedly happened before, it turned up. On the daily chart of the pair since the beginning of August, consolidation around the 61.5 mark is clearly visible. The longer the ruble fluctuates with a low amplitude, the more difficult it will be to bring it out of balance, but the stronger the subsequent movement can be.

However, no reasons are yet visible that will bring the ruble out of hibernation.

European companies are scratching their heads over what to do with gas from storage (October 31, 2022)