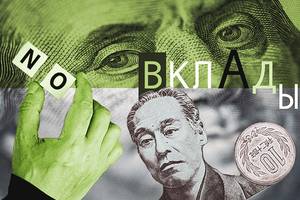 The share of foreign currency deposits of the population in Russian banks is currently at its lowest level in history and is 9.5%, said Mikhail Zadornov, head of Otkritie Bank. However, the banker stressed that the foreign currency funds of the Russians remaining in the banks represent a rather impressive amount.

According to the chairman of the board of Otkritie, at the beginning of the year, the population held about 93 billion dollars and euros in Russian financial institutions, this volume of foreign currency deposits has remained relatively unchanged over the past 15 years. As of October 1, according to the data of the Bank of Russia, the amount fell to 60 billion dollars and euros. This means that since the beginning of the year, about a third of foreign currency savings have been withdrawn from banks, RIA Novosti quotes the opinion of Mikhail Zadornov.

Mikhail Zadornov said that now Otkritie Bank is experiencing a complete devaluation of the corporate segment: since the beginning of the year, the volume of foreign currency assets, almost completely secured by loans to companies, has decreased to 1.5 from 10 billion dollars and euros in dollar terms, and the foreign currency share of the loan portfolio corporate clients by the end of the year may be reduced to 3% from the previous 30%. “Now we have the foreign currency part of the loan portfolio is not 30%, but 8% of the entire portfolio. And by the end of the year it may drop to 3%. In fact, this is a complete devaluation,” the head of the financial institution emphasized.

Devaluation, “although not quickly”, but occurs in the portfolio of securities. Due to non-working mechanisms in the stock market, many Russian issuers issue substitute securities. Settlements for them are already being carried out in rubles. “Therefore, devaluation is the most active process,” Mikhail Zadornov stated.

At the same time, in terms of settlements, there is now a general reorientation from “hard” currencies to “soft” ones: China, Turkey, the Middle East and the CIS countries. “Here we follow our clients, who over the past six months have significantly reoriented trade with European countries to China, India, Asian countries, the markets of the EurAsEC and the CIS states,” summed up the head of Otkritie.

The process of devaluation of the Russian financial system is gaining momentum against the backdrop of the withdrawal of both corporations and citizens from toxic currencies, while at the same time growing interest in instruments related to friendly economies, Mikhail Zeltser, an expert on the stock market at BCS Mir Investments, confirmed. Therefore, the figure of 9.5% is not surprising, despite the fact that even less than ten years ago the percentage was more than twice as high.

And the dynamics towards the rejection of classic foreign currencies is indicative: in fact, foreign currency deposits have sank by a third only since the beginning of the year, the analyst noted in a commentary to Expert. If we consider investments in foreign exchange assets, then deposits in Chinese currencies are seen as interesting, as well as work on the less geopoliticized Hong Kong stock market through the Hong Kong dollar (hkd/rub pair). And domestic corporations are increasingly using funding instruments linked to Asian markets. Polyus RUSAL has already successfully placed its bonds in yuan, the expert recalled.

Gold is better than currencies

The share of foreign currency deposits of the population in Russian banks is falling, and this is due to a large outflow of foreign exchange funds abroad, as well as a significant decrease in demand for foreign currency, Vladimir Sagalaev, financial analyst at the CMS group of companies, admitted in a commentary to Expert. Because of the sanctions, banks began to introduce currency restrictions, unfavorable terms of service. Let’s add here the blocking and freezing of financial instruments in foreign currency of unfriendly countries of Russian investors by foreign companies. Under such conditions, it is clearly impossible to call investments in dollars and euros “safe”.

An alternative is deposits in rubles and in the currencies of friendly countries, the expert believes. This is the safest way. Now for deposits for a period of 30-90 days, rates of 8-10% in rubles are still relevant. The return on deposits follows the key rate and, as a rule, is at or slightly above the official inflation rate. However, it is worth making sure that the interest on the deposit is higher than the inflation rate, otherwise the savings will gradually depreciate.

Investing in bonds is the closest to the format of a bank deposit and the least risky way to make money, the expert continued. It is also suitable for small starting capital, because in most cases the price of one bond is about 1,000 rubles, and there are even less.

Stocks can bring more income than deposits and bonds, but require certain knowledge and training, the analyst warns. Before buying shares, it is important to analyze the state of the company: its business sector, financial performance, revenue dynamics, debt level, and so on. Now shares of Chinese companies in Hong Kong dollars have become available for trading, which eliminates the risks associated with the dollar and the euro, as well as blocking accounts. Therefore, as a diversification, this is a good option, Vladimir Sagalaev noted.

It is also worth considering investing in commodities such as: oil, gas, aluminum, wheat, precious metals. This can be done in several ways: through the appropriate ETF funds, through shares of commodity and agricultural companies. Such as RusAgro, Polymetal, Lukoil, Surgutneftegaz, as well as through futures, but this is a complex and dangerous tool for beginners.

Another option for storing savings is investing in gold bars. It has its advantages and can be a profitable long-term investment. The advantage of such an investment is a stable price. It does not fluctuate much even during a crisis compared to other assets such as stocks. In addition, gold bullion is easy to buy. Individuals can buy gold bars in banks whose activities are confirmed by a license for the purchase and sale of precious metals. It is enough to choose a suitable banking institution and visit it with money and a passport, the expert suggested.

However, it is worth knowing about the risks of investing in gold bars. First, says Vladimir Sagalaev, these are security issues. Physical gold bars are prone to theft due to their high value, so they need to be stored in a safe place. For example, a safe, which causes a number of inconveniences. Secondly, there are storage issues. If you decide to store your gold bars outside of a banking institution, then you need to be aware of the additional costs of authenticating when you return your gold bars to the bank. In addition, any damage (be it a dent, scratch, or something else) reduces the price of the ingot.

A large spread in prices is minus gold. Gold bars have a large difference between the purchase price and the sale price. Most often, 10-20% more expensive than purchased. In addition, Vladimir Sagalaev added, in this case there is no passive income. Investments in gold do not bring it, as, for example, stocks, bonds, mutual funds, deposits do. This state of affairs can be a problem if you are thinking about investing early, the analyst concluded.

Russia in October became the largest supplier of oil to India (November 2, 2022)

Peskov said that Putin’s speech at Valdai will need to be “studyed, read and re-read” (October 27, 2022)

People with disabilities will work at the production of sockets and switches in Moscow (November 7, 2022)