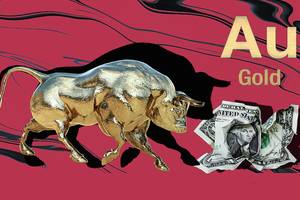 Gold prices fell on Tuesday to the area of ​​1670 dollars per ounce. They remain sideways for the second straight session as investors avoid betting big ahead of US inflation data. This statistic may affect the size of the Fed’s rate hike in December. So far, markets are expecting a more moderate rate hike next month than before, by 50 bp. But a hotter US CPI report on Thursday could force the Fed to raise rates by 75 basis points as well.

Traditionally, gold is viewed by investors as a hedge against inflation and economic uncertainty, while higher interest rates raise the cost of holding bullion. Accordingly, during the period of tightening monetary policy, prices for the “yellow metal” are declining.

Investors continue to watch for signals from China as well, trying to see if the Celestial Empire is considering lifting its zero-tolerance policy on Covid. China is the world’s second largest gold jewelry market after India, and the lifting of Covid Zero will boost demand for the metal.

The political economy is falling – the demand for gold is growing

The medium-term falling trend in the gold market last month showed signs of breaking, said Oksana Lukicheva, an analyst for commodity markets at Otkritie Investments. After reaching by the market at the end of September the level of 1626 USD/oz. prices under the influence of the aggravation of the geopolitical situation grew in early October to 1730 dollars. Then, however, there was a return to the support levels of 1628 – 1630 dollars per ounce.

Near these levels, the demand for the physical metal starts to rise, and this supports the market. However, the tough policy of the leading central banks limits the potential for price growth, the analyst states. However, ahead of the mid-term elections to the US Congress, which will take place today, gold prices reached 1673 dollars per ounce. History shows that congressional elections usually have a positive effect on the stock market, and also provide support for the gold market. This year, this factor again became support for protective assets, reflecting increased political risks in the world’s largest economy. But the negative impact of the monetary policy of the regulators still outweighs and limits the rise in prices.

The US Federal Reserve continues to actively reduce the balance sheet and raise interest rates. The balance sheet as of November 3 amounted to $8.746 trillion (-$39.4 billion compared to the previous week, +$128 billion to the level as of November 3, 2021). The reduction in the Fed’s balance sheet continued to accelerate, the difference with the previous year was reduced. During the November meeting, the interest rate was increased in the range of 3.75-4.0%, which coincided with market expectations.

At the same time, the regulator hinted at the possibility of slowing down the pace of rate hikes in the future, but the peak level of rates may be higher than previously thought. Fed chief Jerome Powell said in his speech that the slowdown in the base interest rate hike is likely to be discussed at the December or February meeting. By March 2023, most market participants expect the Fed’s interest rate to be at the level of 5-5.25%, and in December 2023 – at the level of 4.75-5%.

JPMorgan believes that the most aggressive cycle of tightening interest rates is nearing its end. This is also signaled by a change in the tone of the ECB, the easing of uncertainty in the UK financial sector and a slowdown in rate hikes in Canada and Australia, Lukicheva said. As a result, the monetary tightening cycle could end by early 2023. The refusal of some central banks (Australia, Canada) from an aggressive policy and intervention in the markets by the central banks of Japan, China, India and England also support the gold market.

Demand from central banks in the third quarter of 2022 reached a quarterly record of 399.3 tons. Since the beginning of the year, central banks have purchased 673 tons of gold, which is 62% more than in the three quarters of 2021.

Stocks have spoiled the picture

The only indicator of failure was gold holdings in exchange-traded ETFs. In the third quarter, they fell by 227.3 tons. This factor, Lukicheva notes, has become the main reason for the fall in metal exchange prices since April 2022. In October, the largest outflow was observed from North American funds, in a much smaller amount – from European and Asian ones.

The protracted exit of large investors from exchange-traded gold-based ETFs has led stock prices to fall by more than $300/oz over the past seven months. Consumers of the physical metal reacted positively to the decline in prices, respectively, increasing purchases as a means of savings. Moreover, central banks have also stepped up activity in the global market. This slowed down the rate of price decline and creates prerequisites for their further recovery, starting from the fourth quarter of 2022.

In addition, the analyst continues, sentiment in the precious metals market may improve under the influence of high retail demand and the risk of closing short positions on COMEX. Beyond their traditional safe-haven function, decentralized assets are now gaining in popularity due to their independence from failed monetary and fiscal policies.

As for Russia, here, according to the WGC, in the third quarter of 2022, investors purchased 6.5 tons of investment coins and bars, and since the beginning of the year, 20.5 tons have been bought, which is five times higher than last year’s demand. Taking into account the average value of sales per quarter, it can be assumed that about 30 tons of gold will be sold on the domestic market per year. However, data on the sales of the largest banks show that the investment demand for gold in Russia in 2022 may well reach 50 tons, Oksana Lukicheva believes.

Thus, concludes Oksana Lukicheva, the fourth quarter of 2022 began positively for the gold market due to seasonal growth in demand, as well as an increase in geopolitical tensions. The planned slowdown in the tightening of the monetary policy of regulators supports this trend and creates prerequisites for continued price growth next year. Market participants’ expectations are more and more inclined towards price recovery, and estimates of their average level for the next year show the likelihood of positive dynamics.

Elections will decide everything

Meanwhile, on Tuesday, November 8, gold prices in the morning trading show a slight negative trend, according to TeleTrade analyst Alexei Fedorov. They shed 0.3% to $1,669 a troy ounce but remain close to three-week highs ($1,681) ahead of major political and macro events this week.

The expert also recalls that gold prices have been declining for almost the entire last week. After the unexpectedly hawkish results of the Fed meeting last Wednesday, November 2, the quotations of the main precious metal at the moment reached the lowest levels since September 28 – $ 1,616 per troy ounce – threatening a stronger price drop to the next support level of $ 1,550.

However, the situation changed dramatically on Friday, November 4, after the monthly report on the US labor market, contrary to the Wall Street consensus forecast, showed that the unemployment rate in the US economy rose in October from 3.5% to 3.7%. The unexpectedly strong deterioration in the situation on the labor market once again revived in the minds of investors the hopes for a “softening” of the trajectory of the Fed’s discount rate increase in December and weakened the position of the US currency. The dollar index (DXY) has already lost 2.4% since last Friday, November 4, while gold has gained 2.6% over this period.

The market does not decide to move on: in order to develop the history of the “reversal” of the Federal Reserve System, investors need new macroeconomic evidence – this time from inflation data, Fedorov points out. Wall Street consensus forecasts suggest that October data on inflationary pressures will provide such confirmation. The consumer price index (CPI) in general and base terms should decline year-on-year from 8.2% to 8.0% and from 6.6% to 6.5%, respectively.

If these data were released today, November 8, then we would probably see a further gradual weakening of the US currency and the growth of gold in the direction of the nearest resistance zone of 1710-1730 dollars per troy ounce. However, statistics on the consumer price index in the US will be released only on Thursday, November 10, and the markets until that time will have to go through perhaps the main political event of the year.

In the United States today, November 8, the midterm elections are to be held. Their results will determine the degree of domestic political chaos in the United States in the next 2 years – that is, until the next presidential election in 2024. If the consensus forecasts turn out to be correct, then the Republican Party will seize control in both houses of Congress at once. Naturally, in this case, Joe Biden and his administration, as representatives of the Democratic Party, will lose the opportunity to quickly pass laws, say, in the event of a full-scale economic crisis, the expert notes.

Moreover, already in December, the US national debt may reach the established limit of $31.4 trillion (currently it is $31.27 trillion), so the strengthened Republican Party is highly likely to arrange a shutdown.

“That is, we can get a situation in which, due to the Congress being blocked in decision-making, the only response to the growth of domestic political instability will be an unexpected “stop” of the Fed with a corresponding strong weakening of the US dollar,” says Fedorov.

The first results of the midterm elections in the United States will begin to appear on the morning of Wednesday, November 9th. So, the expert concludes, in combination with fairly positive expectations from the publication of data on US inflation on November 10, after some volatility, it will be possible to expect further growth in gold prices – at least to the next resistance zone of 1710-1730 dollars per troy ounce.

The cost of “blue fuel” in Europe does not show explosive growth due to still mild weather conditions, but is growing steadily (November 28, 2022)

Russians are less likely to complain about creditors (November 8, 2022)