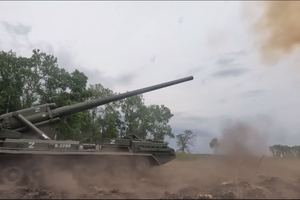 The Ministry of Defense of the Russian Federation at a briefing on October 28 reported operational news on the course of a special military operation in Ukraine.

As the official representative of the department, Lieutenant General Igor Konashenkov, said, over the past day, Russian operational-tactical and army aviation, as well as missile forces and artillery, destroyed 5 ammunition depots of the Armed Forces of Ukraine in the areas of the settlements of Vesyoloye (DPR), Davydov Brod, Novaya Kamenka (Khersonskaya region) and the city of Nikolaev.

In general, artillery and aviation strikes hit 6 command posts of the Armed Forces of Ukraine in the Kharkiv region, the DPR, LPR and Nikolaev, as well as 74 artillery units in firing positions, enemy manpower and military equipment in 167 districts.

In the South-Donetsk direction, the company tactical group attacked the positions of Russian troops in the area of ​​​​the settlement of Vremevka (DPR), the enemy was thrown back to their original positions. More than 30 Ukrainian servicemen, 1 tank, 2 armored fighting vehicles and 1 pickup were destroyed.

In the Kupyansk direction, the enemy, with forces up to a reinforced battalion, attacked the positions of the RF Armed Forces in the direction of the settlement of Berestovoye (Kharkov region). All attacks were repelled. As a result of the inflicted fire damage, more than 150 Ukrainian servicemen, 1 tank, 5 infantry fighting vehicles, 4 armored personnel carriers and 9 pickups were destroyed.

In the Nikolaev-Kryvyi Rih direction, the concentrated fire of Russian artillery and army aviation strikes defeated the reserves of Ukrainian troops advanced from the depths, as well as sabotage groups near the line of contact. As a result, the allied forces destroyed more than 180 Ukrainian servicemen, 8 armored fighting vehicles and 6 vehicles.

In the Krasno-Limansky direction, 2 battalion tactical groups of the Armed Forces of Ukraine conducted offensive operations near the settlement of Chervonopopovka (LPR). The enemy was stopped by the active actions of the Russian troops. More than 50 Ukrainian servicemen, 2 tanks, 3 armored combat vehicles and 2 vehicles were destroyed by artillery fire and army aviation strikes.

As before wrote “Expert”at a briefing on October 27, the Ministry of Defense of the Russian Federation reported on the successes that the Russian army has achieved over the past day in the course of a special military operation ongoing in Ukraine.

In particular, Konashenkov said that in the Krasno-Limansky direction, the battalion tactical group of the Armed Forces of Ukraine attempted an offensive in the direction of the Chervonopopovka settlement (LPR). The advancing enemy units were stopped by the active actions of the units of the Russian troops. As a result of fire damage in this direction, more than 120 Ukrainian servicemen, 3 tanks, 4 armored combat vehicles and 4 pickup trucks were destroyed.

The Board of Directors of Detsky Mir will consider the issue of transforming the network into a private company (November 7, 2022)

Cinemas in the Russian Federation collected more than 550 million rubles for the weekend for the first time since mid-February (November 7, 2022)

The US shale revolution is officially over (November 25, 2022)