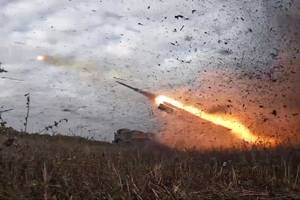 The Russian Defense Ministry presented new data on the progress of the special operation in Ukraine. In particular, the department said that in a day the Russian Armed Forces destroyed more than 60 Ukrainian soldiers in the Kupyansk direction.

“In the Kupyansk direction, the active actions of the Russian troops, artillery fire and air strikes repulsed the attack of the reinforced motorized infantry battalion of the Armed Forces of Ukraine in the direction of the Kuzemovka settlement of the Luhansk People’s Republic. More than 60 Ukrainian servicemen, two infantry fighting vehicles and five vehicles were destroyed,” the report says.

It is reported that in the Krasnolimansky direction of the Armed Forces of Ukraine, four motorized infantry and one tank company, reinforced by foreign mercenaries, attempted simultaneous attacks on the positions of Russian troops in the directions of the settlements of Makeevka, Ploschanka, Golikovo and Kremennaya of the Luhansk People’s Republic. “Enemy units were stopped by the fire of artillery units, heavy flamethrower systems and army aviation strikes and pushed back to their starting lines,” the Defense Ministry said in a report.

It is also reported that an ammunition depot of the Armed Forces of Ukraine with rockets of the MLRS HIMARS, Alder and artillery ammunition was liquidated in the Dnepropetrovsk region.

In addition, the Russian military stopped attempts to penetrate 12 sabotage and reconnaissance groups of the Armed Forces of Ukraine in the Nikolaev-Krivoy Rog direction in a day.

In the USA, they talked about the reason for the start of the Russian special operation in Ukraine (October 27, 2022)

The cost of “blue fuel” in Europe does not show explosive growth due to still mild weather conditions, but is growing steadily (November 28, 2022)