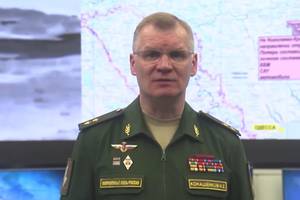 The Russian military repelled the attacks of the Armed Forces of Ukraine in the Krasnolimansky direction, killing more than 170 Ukrainian militants.

This was stated during the briefing by the official representative of the Russian Defense Ministry, Lieutenant-General Igor Konashenkov.

“The enemy with three company tactical groups tried to conduct offensive operations in the direction of the settlements of Makeevka and Chervonopopovka of the Luhansk People’s Republic. All enemy attacks are repelled. During the fighting, Russian troops destroyed more than 170 Ukrainian servicemen, three tanks, five armored combat vehicles and nine vehicles,” Konashenkov said.

In the Kherson region, a German self-propelled artillery PzH 2000 was destroyed; four ammunition depots were destroyed in the same region and in the DPR.

In the areas of the settlements of Novaya Kakhovka and Antonovka, Kherson region, four HIMARS and Alder MLRS shells, as well as seven HARM anti-radar missiles, were intercepted in the air, Konashenkov said.

The official representative of the defense department said that Russian high-precision air and sea-based weapons hit all designated military command and energy facilities. “The Armed Forces of the Russian Federation continued to strike with high-precision long-range air and sea-based weapons against the military command and energy systems of Ukraine. Strike targets achieved. All designated objects were hit,” he stressed.

Zaporozhye authorities do not plan to evacuate residents to other regions (November 11, 2022)

Students and PhD students will test the VEB.RF Index (October 28, 2022)