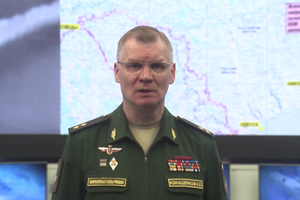 The Kyiv regime carried out a terrorist attack on ships of the Black Sea Fleet and civilian vessels in Sevastopol, using nine drones and seven autonomous maritime drones, said Russian Defense Ministry spokesman Lieutenant General Igor Konashenkov. According to the agency, a division of the British Navy was responsible for the preparation of this terrorist attack, which also participated in the “planning, provision and implementation” of the undermining of the Nord Stream.

“Today at 4.20 am, the Kyiv regime carried out a terrorist attack on ships of the Black Sea Fleet and civilian ships that were on the outer and inner roadsteads of the Sevastopol base. The attack involved nine unmanned aerial vehicles and seven autonomous maritime drones. As a result of the operational measures taken by the forces of the ships of the Black Sea Fleet, all air targets were destroyed, ”Konashenkov said.

The representative of the Ministry of Defense also clarified that on the outer roadstead of Sevastopol, with the help of naval weapons and naval aviation of the Russian Black Sea Fleet, four marine unmanned vehicles were destroyed, and three more were liquidated on the inner roadstead. During the attack by drones, according to the agency, the sea minesweeper Ivan Golubets and the bonnet barrier in Yuzhnaya Bay received minor damage.

The Ministry of Defense emphasized that the ships of the Black Sea Fleet that were subjected to a terrorist attack are involved in ensuring the security of the “grain corridor” as part of an international initiative to export agricultural products from Ukrainian ports.

“The preparation of this terrorist act and the training of the military personnel of the Ukrainian 73rd Special Center for Maritime Operations were carried out under the guidance of British specialists located in the city of Ochakov, Mykolaiv region of Ukraine. According to available information, representatives of this unit of the British Navy took part in the planning, provision and implementation of a terrorist attack in the Baltic Sea on September 26 of this year. to blow up the Nord Stream 1 and Nord Stream 2 gas pipelines,” Konashenkov stressed.

The United States learned about Turkey’s plans not to sign Sweden’s application to NATO (November 3, 2022)

The Central Bank dispelled the myths about the new form of the ruble in advance (November 11, 2022)