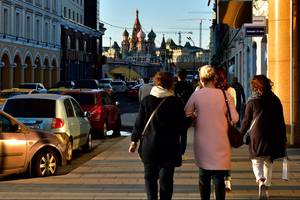 Most of the citizens of the Russian Federation polled by the All-Russian Public Opinion Research Center (VTsIOM) are sure that in 8-10 years the situation in Russia will only improve.

This was announced during the All-Russian Scientific and Practical Conference on Social Sciences, which opened in Sochi, the Director General of VTsIOM Valery Fedorov, TASS reports.

“The results of the survey, how our compatriots see Russia in 8-10 years, [показывают]that about 80% are confident that the situation will improve or improve significantly,” Fedorov said. The sociologist clarified that, according to only 16% of Russians, the situation will worsen one way or another.

At the same time, the number of Russians who are going to move to a permanent place of residence (permanent residence) in another country has dropped sharply, Fedorov said. “Since 1991, we have been asking the same question: are you going for permanent residence abroad. And all the time we have more or less the same results: 16-17% on average say yes. It is clear that such efforts are being made much less,” said the head of VTsIOM.

According to Valery Fedorov, now the proportion of those who answered “yes” to the question about permanent residence has fallen to about 10%.