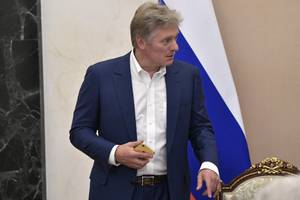 The head of the presidential press service, Dmitry Peskov, during a daily briefing with journalists, assessed the withdrawal of the RF Armed Forces from Kherson, while commenting on the negative assessments of some analysts on the decision to withdraw troops beyond the Dnieper.

According to a Kremlin spokesman, there are many experts, but opinions are different, a special military operation continues, RIA Novosti reports.

In addition, the press secretary of the Russian leader stressed that the Kherson region is a subject of the Russian Federation, this status is fixed, and there can be no changes here.

“Legislatively, this subject is fixed, defined. There are no and cannot be any changes,” the Kremlin spokesman summed up.
As before wrote “Expert”On November 9, Russian Defense Minister Sergei Shoigu, after listening to the report of the commander of the Joint Group of Russian Forces in the area of ​​the NVO, Sergei Surovikin, ordered to begin the withdrawal of troops across the Dnieper.

At a briefing on November 10, the official representative of the department, Lieutenant General Igor Konashenkov reportedthat in the Nikolaev-Krivoy Rog direction, the maneuver of units of the group of troops of the RF Armed Forces is already being carried out to prepared positions on the left bank of the Dnieper River, in strict accordance with the approved plan.

Vladimir Efimov: a production facility for 230 jobs will be built in the southeast of Moscow (November 11, 2022)

Profit of Otkritie Bank since the beginning of the year amounted to 28 billion rubles (November 10, 2022)