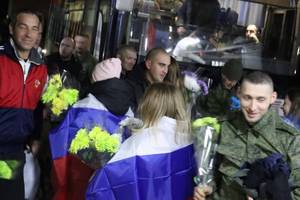 As part of another exchange of prisoners between the Russian Federation and Ukraine, 35 servicemen of the People’s Militia returned to the Luhansk People’s Republic.

This was announced by the acting head of the region Leonid Pasechnik.

“35 servicemen of the People’s Militia of the LPR returned home from Ukrainian captivity. Needless to say about the conditions of detention in Ukrainian captivity: beatings, bullying… The heroes of the Luhansk region are exhausted, but not broken!” — the official wrote in his Telegram channel. He added that now the released are undergoing a medical examination, rehabilitation awaits them ahead.

Pasechnik did not specify when exactly the exchange took place, saying that work is currently ongoing to release all military personnel and civilians from captivity from captivity.

The last time the exchange of prisoners between Moscow and Kyiv took place on November 3, it was carried out according to the formula “107 to 107”.

In mid-October, the acting head of the DPR Denis Pushilin said that 110 people were transferred to Russia, and 108 prisoners were sent to Ukraine. Then an exchange was planned according to the formula “110 for 110”, however, according to Pushilin, two women refused to go to Ukraine and decided to stay in the Russian Federation.

In September, Pushilin reported on a prisoner exchange with Kyiv, in which 55 people were released by Ukraine, as well as a pro-Russian politician Viktor Medvedchuk. 215 people went home to Ukraine.

In Moscow, the calendar winter will begin with January frosts and abnormal pressure (November 27, 2022)