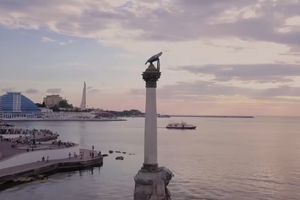 The Governor of Sevastopol, Mikhail Razvozhaev, announced the successful repulsion of all attacks by Ukrainian drones. According to him, for several hours, starting at 4:30 in the morning, various air defense systems shot down UAVs in the waters of the Sevastopol Bay. In his Telegram channel, Razvozhaev asked the townspeople not to distribute videos with the operation of air defense systems, so that the enemy would not understand how the city’s defense system was built.

“Today, starting at 4.30 am, for several hours, various air defense systems in Sevastopol repelled drone attacks. All UAVs were shot down. According to the current situation: in addition to the UAV, our military, according to preliminary information, also destroyed a surface drone in the water area. All services of the city were in readiness, civilian infrastructure facilities were not damaged,” the governor said.

He clarified that only in the dormitory of the Sevastopol Professional Art College, which is located next to the water area, “one window pane burst from a loud sound”, there were no victims. The raid of the Sevastopol Bay is temporarily blocked, Razvozhaev wrote, promising to inform as soon as he resumes work.

“A big request not to write what-where-what time you saw and heard. And don’t post videos. It should be clear to everyone that the Ukronazis really need such data in order to understand how the defense of our city is built, ”added the governor.

In Germany, a wind farm is being dismantled to mine coal in its place (October 28, 2022)

Only Wagner PMCs go forward: a veteran of the special forces of the Ministry of Internal Affairs about the infantry crisis in the RF Armed Forces (October 28, 2022)

In Russia, they proposed a replacement for the Central Bank (October 27, 2022)