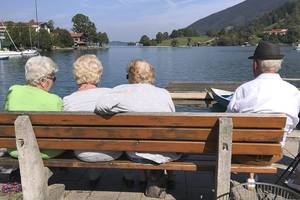 Germany has one of the oldest populations in Europe: 22%, i.e. one in five is over 65. Moreover, the number of older people in the next few years will increase significantly. This means that less and less money will flow into the German social security system, and more and more will be taken from it. Despite warnings from a number of respected economists, several recent German governments, writes the Times, not only refused cuts and austerity, but also increased payments.

Recently, the retirement age in Germany has been raised from 65 to 67 years. However, those who have paid social contributions long enough can start receiving payments with small penalty deductions as early as 63 years old.

The president of the Federal Association of German Employers’ Associations (BDA), Rainer Dulger, warned that if urgent action is not taken, the social security system will fall apart within five years, and called for “great social reform”. Moreover, the scale of this reform should be comparable to the reforms carried out in the country after the reunification of Germany three decades ago.

“Prices are going to fall apart,” Dulger told Bild am Sonntag. “We urgently need to remove and replace the old rules. Now we have about 50 pensioners for every 100 working Germans who pay contributions, but in 15 years there will be 70 pensioners for every 100 workers. This means that the financing of our pension system is on the verge of bankruptcy. In Berlin, everyone knows these numbers, but no one has the courage to say them out loud.”

Dulger also believes that the retirement age should automatically increase along with the increase in life expectancy. Today, the average 65-year-old German is predicted to live another 29.7 years. In 2000 this figure was 18, and in 1980 it was 14.9 years.

Economists in the federal government project that over the next forty years, life expectancy will increase by 5.5 years for men and 4.3 years for women.

“I’m sure Social Security reform will be as difficult as the energy transition (from fossil fuels to renewables),” Rainer Dulger is quoted by the Times, “but it will undoubtedly be just as important for intergenerational equity.”

German politicians prefer not to discuss this problem and try to talk about it as little as possible. Federal Chancellor Olaf Scholz and his Social Democratic Party are heavily dependent on older voters, who are over 65. Therefore, they have made issues of the pension system a priority.

In the summer of 2021, Scholz, then the Minister of Finance of Germany, categorically rejected the proposal of a group of experts from the Ministry of Economics to increase the retirement age by 2042 to 68 years.

“I intend to keep my promise not to discuss any further increase in the retirement age,” he said.

The Ministry of Defense announced the completion of measures for partial mobilization in Russia (October 31, 2022)

France called on the US and the EU to force Zelensky to dialogue with Russia (November 8, 2022)