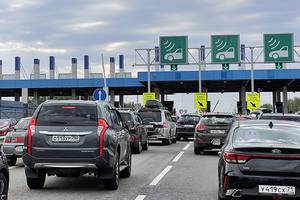 The payment acceptance machine and communication panels, developed by the Moscow SAGA corporation, have been successfully tested on the M-4 Don highway. This was announced on November 3 by the head of the department of investment and industrial policy of the capital Vladislav Ovchinsky.

He recalled that SAGA is one of the most high-tech enterprises in Moscow, since 2006 the corporation has developed more than a thousand different devices, and many of them are protected by patents. “Last year, the production of a payment acceptance machine was launched, and this year, a communication panel. To test the effectiveness of the devices were installed on the highway M-4 “Don”. During testing, they demonstrated high performance,” said Vladislav Ovchinsky.

According to the head of the department, a prototype of a cashless payment machine was installed at the 51st kilometer of the highway in the second quarter of 2022.

And in early October, testing of the communication panel started, it was installed at the payment acceptance point on the 133rd kilometer of M-4 Don, added the general director of the SAGA corporation Andrey Zholobov. “Voice communication between subscribers and operators was stable and was not disturbed by the acoustic impact of either cars or trucks. This was achieved with the help of specialized software,” he said.

Let us add that the corporation’s production capacities allow manufacturing up to 300 payment acceptance machines per month, as well as up to 1,000 intercoms (communication units). They can be used at various enterprises to communicate with the dispatcher, in railway cars, as well as in the “safe city” system for communication with the situational center from different parts of the city.

Cryptocurrencies collapsed due to a liquidity crisis on the FTX exchange (November 9, 2022)

Shoigu ordered to withdraw troops to the left bank of the Dnieper (November 9, 2022)