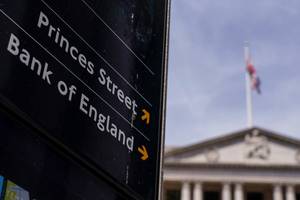 The Bank of England on Tuesday held its first auction of government bonds from its £875 billion ($1.01 trillion) holdings it amassed through quantitative easing (QE) in 2009-2021. The bank sold papers with maturities of 3 to 7 years for 750 million pounds.

This auction is another move by the Bank of England towards the kind of monetary policy that prevailed throughout the developed world before the 2008 financial crisis. And he doesn’t have much choice – inflation in the UK is already in double digits.

But many central banks are in a similar situation, with the Bank of England tightening policy over and over again. In December last year, he was the first in the G7 to start a rate hike cycle, and in February of this year, passive quantitative tightening (quantitative tightening, QT). He was reducing his investment in British government bonds, saying he would no longer buy new ones to replace those that had expired.

In August, the Bank of England announced the transition to active tightening. He said he wants to cut his holdings of securities by £80bn over 12 months starting at the end of September. To do this, he was going to sell bonds for 10 billion pounds every three months.

But he was the first to run into problems.

The start of sales was delayed first by the death of the Queen, and then by the chaos in the stock market, the reason for which was the absurd budget plans of the then Prime Minister Liz Truss. But the main reason and the main problem was the too rapid growth of rates, which threatened the existence of a number of British pension funds.

Now the US Fed and the Bank of Canada are still busy with passive quantitative tightening, so the Bank of England will again be the first. His auctions will be a test of how quickly the markets can give up easy money.

The risks with QT are really great. In much more favorable conditions – even before the pandemic – the Fed had already started this process once. Difficulties then arose far from immediately, but at some point, against the backdrop of growing problems in the financial markets, Jerome Powell decided to abandon the tightening.

“This is a significant moment as the equity market adjusts to a non-QE future,” Citigroup strategist Jamie Searle wrote yesterday. “But concerns remain about who will buy all these British government bonds.”

Another question that the Bank of England has not yet answered is how it will get rid of long-term securities. Their last – emergency – purchases, he completed only in October. The operations were carried out to stabilize financial conditions, but although formally the bonds are kept in a separate portfolio, in fact this is quantitative easing. The Bank of England has so far only said on October 20 that it will lay out its approach to winding down its portfolio of recent purchases “separately at the appropriate time.” And the market believes that this will not happen soon.

“We think that the Bank of England will start selling long bonds only after it reduces assets as part of its temporary program,” Meguma Muhich, an analyst at RBC Capital Markets, was quoted yesterday by Bloomberg. “But we do not expect the Bank of England to want to go next year without having to increase the net supply of long-term bonds and risk a repeat of the pension fund crisis that occurred a few weeks ago.”

Metropolitan public activists proposed to stop applying the article of the Criminal Code on organized criminal groups in relation to businessmen (November 3, 2022)