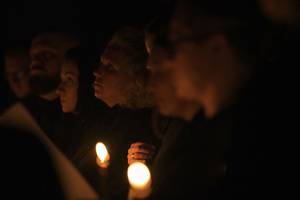 The geography of the tour covered both the largest concert venue in Yerevan – the Aram Khachaturian Concert Hall, and historical locations – the “Temple of Vigilant Angels” in the vicinity of the city of Zvartnots and the Church of the Holy Mother of God “Seven Wounds” in Gyumri. The events became possible with the participation of the Ministry of Economy and the Ministry of Education, Science, Culture and Sports of the Republic of Armenia, as well as with the personal initiative and support of Vardoui Nazarian. Ivan Nechaev talks about musicAeterna’s first tour in Armenia.

The opening of the first tour in Armenia was the concert of Teodor Currentzis and the musicAeterna orchestra with three compositions by the genius of the Russian composer school, Pyotr Tchaikovsky. Three iconic themes for Tchaikovsky – respect for elders, love and respect for loved ones and compassion for people’s misfortunes – were embodied this evening. From the presence of the legendary Armenian composer Tigran Mansuryan at the concert to the encore performance of the Armenian anthem, the anthem of loyalty, friendship and love, full of emotional experiences – the adagio from Aram Khachaturian’s ballet “Spartacus”.

The second part opened with the overture-fantasy Romeo and Juliet, one of the brightest and most typical examples of Tchaikovsky’s psychologically generalized program symphonism. In this material, Teodor Currentzis seems to rely on the continuity of the material to the composer’s early student work, the Thunderstorm overture, emphasizing in music the desire for true happiness, mental rushing, the apogee of a desperate struggle and the acquisition of death as the highest bliss. The climax of this path was the fanfare theme of the next composition of the program – Tchaikovsky’s Italian Capriccio, where the soft, expressive, slightly swaying melody, which the oboes intoned against the background of the abrupt sounds of stringed basses, sounded especially expressive. The dance-marching rhythm, which is so organic to Currentzis, is replaced by a lyrical melody full of languor and sadness, impeccably articulated, which is subsequently replaced by a swift tarantella, in the interpretation of the musicAeterna orchestra – an irresistible whirlwind movement, which, speeding up, breaks off with powerful chords, immediately provoking a long and stormy ovation.

After the concert, Tigran Mansuryan stressed that nothing more significant in terms of the quality of performance had ever taken place within the walls of the Aram Khachaturian Concert Hall. Tchaikovsky performed by musicAeterna turned out to be not so much about the battle with fate, but about the expression of grief and nostalgia on the part of someone who is already crushed by this fate.

Suffering in all languages

The second day of the tour turned out to be one of the most exciting – for the first time the new dance troupe musicAeterna Dance, the creation of which Teodor Currentzis inspired in September of this year, was supposed to perform in front of the public on the basis of a residence in the Radio House. The performance was called “Suffering sounds the same in all languages” and took place right at the foot of the sacred Mount Ararat in the ancient temple complex of Zvartnots – the Temple of Vigilant Angels. Choreographer Vladimir Varnava and director Anna Guseva presented a lament dance, recreating the ritual of mourning innocent souls in a bodily rite. Simple and understandable movements, direct gestures, meta-primitivism, unmistakably read by the carriers of any cultural code, unfolded at sunset, surrounded by ancient stone boulders and open fire, to a hypnotic multi-channel sound installation created by sound engineer Vika Kraa, who combined ritual lamentation performed by a professional mourners from Armenia, electronic noise with the sounds of the wind walking around the Zvartnots temple, and the noise of the voices and sighs of the participants in the production. The climax of the performance was again the acoustic effect of the phrase “suffering in all languages ​​sounds the same” carried by the wind across the plateau, uttered with attack and aspiration, awakening both deep anxiety and religious resignation.

The central event of the first tour in Armenia was the performance by the musicAeterna choir conducted by Teodor Currentzis of one of the best works in the genre of religious music and a true masterpiece of the composer Alfred Schnittke – Concerto for mixed choir a cappella, written on the basis of the third chapter of the “Book of Lamentations” by the Armenian medieval poet, philosopher and theologian, saint of the Armenian Apostolic Church Grigor Narekatsi (951-1003).

The composition begins in the center of “nowhere-being”, hanging in an extremely quiet uncertainty between major and minor. The choir masterfully articulates the oppositions of extremes that abound in the text of Narekatsi: “the sweetest – frightening”, “terrifying – gracious”. Particularly important words and antitheses are emphasized by dynamic and timbre juxtapositions. The composition is held together by a textured “bell rhythm”, performed only by voices, leading to a radiant and affirmative major.

The second part of “To All Those Who Delve into the Essence of Sorrowful Words” is built precisely on the chime of bells, which is also imitated here by the voices of the singers. An almost temple-like sound is achieved in the concert hall. A mournful melody is born from a sung, rhythmic word, and harmony grows out of the melody: the melodies gradually layer on top of each other and form chords. This part is the center of gloomy repentant sorrow, with bewitching repetitions: again and again the minor chimes of the choir bells appear, mourning the motives of the minor melody.

The third section is already an impulsive, intense unfolding of thought. The performance sounds harsh, it is full of harsh, sometimes dark expression, and ends powerfully in D major – the traditional key of glorifying God.

The fourth, final part is a small light code. Here are the main techniques and intonations that sounded throughout the concert, accompanied by the chants of the word “Amen”, which create a feeling of fading and disappearing time, returning everything to the same point of “nowhere-being”.

The musicAeterna choir (choirmaster – Vitaly Polonsky) in this work shows all its mobility, performing awareness and power, perfectly processing elements of music coming from completely different traditions of extremely different countries and eras that Schnittke combined in the composition. The tradition of Russian sacred music performed by musicAeterna gracefully turns into Bach’s. The Russian style of “solid singing”, coming from long, “plain” chants of znamenny chant and elements of Armenian color, flows seamlessly to early European polyphony. It turned out, perhaps, the best embodiment of the hardly achievable universal style of sacred music, richly fanned with archaism.

The final event of the tour was the nightly choral concert Lux Aeterna (“Eternal Light”), which brought together ten centuries of sacred music. The concert began at midnight, two hours drive from Yerevan, on the central city square of the “cultural capital of Armenia”, the city of Gyumri, where the original Church of the Holy Virgin, also known as the Seven Wounds, is located. The doors of the Basilica, made of processed black tuff and containing the icon of the Seven Sorrows of the Holy Mother of God, were open to all those who suffer. It was completely free to enter the concert. The Byzantine church chant of the soloists of the musicAeterna byzantina choir under the direction of Antonios Kutrupis coexisted with the medieval Western European spiritual tradition of musical composition interpreted by the musicAeterna choir under the direction of Teodor Currentzis. Works without authorship were replaced by author’s works by György Ligeti and residents of the Radio House – Alexei Retinsky and Andreas Mustukis. The culmination and the most powerful point of the concert was the performance of the work Crusifixus by the Italian late Baroque composer Antonio Lotti. Beautiful dissonances, elegance and showiness of framing word constructions that anticipate the Rococo style and early examples of Mozart and Haydn, as well as the already obvious Italian fluency of the melody from the same world as the Stabat Mater of Vivaldi and Pergolesi. Such a palette of musical styles especially organically filled the vaults of the Church of the Holy Mother of God, where there are five altars at once, provided for followers of different faiths. The main altar, of course, is intended for adherents of the Armenian Apostolic Church, the rest – for the Orthodox, Catholics, Assyrians. The fusion of music and location only underscored the leitmotif of this tour – regardless of the many differences – pain, suffering and compassion in all languages ​​sound the same.

An operational headquarters for monitoring cyberattacks will appear in Russia (November 11, 2022)

Fix Price’s net profit grew by more than 20% due to the expansion of the network and the growth of LfL sales (October 27, 2022)

The Ministry of Defense announced the destruction of hundreds of military AFU, militants and mercenaries (November 6, 2022)