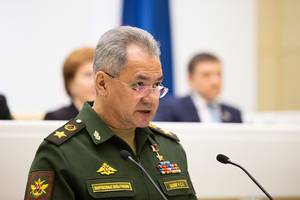 The head of the Ministry of Defense, Sergei Shoigu, at a conference call, said whether conscripts who enter military service as part of draft campaigns will be sent to the special operation zone in Ukraine.

According to the minister, conscripted servicemen perform tasks in accordance with the purpose of military units, and they will not be sent to the special military operation zone. At the same time, the minister stressed that all conscripts who have completed their service will be sent home, RIA Novosti reports.

Meanwhile, the head of the Russian military department said that 87,000 people out of 300,000 called up as part of partial mobilization were sent to combat areas. He noted that about three thousand instructors who received combat experience during the NWO were involved in working with the mobilized.

“At the training grounds, the combat coordination of the formed units is being completed,” Shoigu emphasized. “The main efforts are focused on field training, the ability to use means of communication, navigation and reconnaissance.”

In addition, he said that the training centers train the crews of combat vehicles and tanks, artillerymen, snipers, specialists of unmanned aerial vehicles, electronic warfare and others.

Previously “Expert” wrotethat on October 31, the Ministry of Defense of the Russian Federation announced the completion of the draft from the reserve as part of partial mobilization, the delivery of subpoenas is terminated. As reported in the department, on behalf of Defense Minister Sergei Shoigu, the General Staff of the Russian Federation sent instructions to the commanders of the military districts to report on the completion of partial mobilization measures by November 1.

Tourists and investors on their way to the Far East (October 31, 2022)

Moscow authorities approved the construction of a cosmetics plant for 440 million rubles (November 8, 2022)