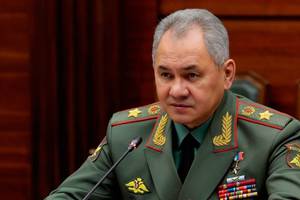 The current situation is beneficial to the United States, which seeks to use it to maintain global leadership, but the main goal of the collective West is the destruction of the economy and military potential of Russia.

According to RIA Novosti, this was stated at a meeting of the joint board of the Ministry of Defense of the Russian Federation and Belarus by the head of the Russian military department Sergei Shoigu.

At the same time, Shoigu is convinced that the main goal of the destructive efforts of the collective West is different. This, in his opinion, is about Russia.
“The destruction of the Russian economy, our military potential, the deprivation of the opportunity to pursue an independent foreign policy is the main goal of the West,” summed up the head of the Russian Defense Ministry.

As before wrote “Expert”, Russian Foreign Minister Sergei Lavrov explained why no one can undermine the Russian economy. In his opinion, this is impossible, since the Russian Federation is following its own course, despite all the difficulties.

“It can be said with confidence that no one will ever be able to stop the Russian economy and undermine domestic political stability in the country,” Lavrov said in a speech read at the World Thematic Conference of Russian Compatriots Living Abroad.

At the same time, the head of the Foreign Ministry drew attention to the fact that Russia, under the conditions of strong sanctions, is actively developing relations with the states of the CIS, Asia, the Middle East, Africa and Latin America.

Fix Price’s net profit grew by more than 20% due to the expansion of the network and the growth of LfL sales (October 27, 2022)

The head of the Human Rights Council announced the creation of a single database of victims of political repression (October 30, 2022)