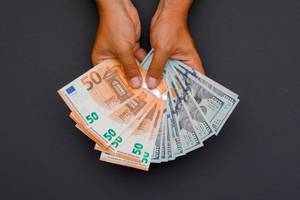 Over the past six months, the proportion of Russians who are purposefully interested in foreign exchange rates has halved. If earlier there were 52% of such people, now it is only up to 26%, RBC reports, citing data from the NAFI analytical center.

According to the results of the October survey, which involved 1,600 people from 53 regions of the Russian Federation, it turned out that young people are more often interested in exchange rates (40% among respondents aged 18 to 24), men (34% versus 19% of women), managers of secondary and higher link (42%), as well as Russians with a high level of prosperity (32%).

The researchers noted that the “currency” forecasts of the Russians have also changed. If in the spring the citizens of the Russian Federation more often predicted the growth of the dollar and euro against the ruble, now the most popular forecast is a decrease in their value – this opinion was expressed by more than a third of the respondents (35%).

“Young Russians under 24 years old (31% against 17% on average in Russia) and respondents with higher education (23%) expect an increase in the dollar and euro. Reducing the value of currencies is more likely to be expected by respondents aged 25 to 34 (43% versus 35% on average in Russia). In addition, the share of those who find it difficult to make a forecast regarding the exchange rate increased by 2.5 times (from 11% in August to 28% in October),” the study says.

Timur Aimaletdinov, Deputy General Director of NAFI, believes that interest in exchange rates, regardless of the availability of relevant savings, is one of the signs of financial literacy and the breadth of a person’s economic views. The October study, in his opinion, showed that along with the interest in exchange rates, the number of Russians keeping savings in them also decreased.

Shares of metallurgists went up on anticipation of the state defense order (October 28, 2022)