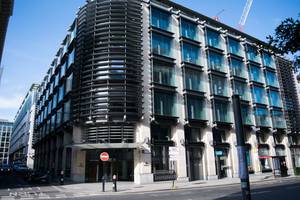 According to the results of the third quarter, the net profit of the international holding Euroclear (includes bank and clearing) amounted to €667 million, which is almost twice as much as in the same period last year, follows from the company’s report. At the same time, the frozen assets of Russian investors had an “unprecedented” impact on financial results, in 9 months they brought in an income of €340 million.

“Sanctions imposed by the US, EU and other jurisdictions, as well as Russian countermeasures, resulted in a loss of income from Russia-related businesses, which was more than offset by an increase in interest income. Under Euroclear’s standard process, cash balances arising from sanctions are invested, which, depending on the prevailing interest rates, results in interest income. For nine months, cash flows from Russia sanctions totaled EUR 340 million,” the report says.

From the table of consolidated financial indicators of the holding, it follows that Euroclear’s net profit, compared to January-September 2021, increased by 95%, to €667 million. accounted for profit from the assets of Russian investors.

Due to EU sanctions imposed on the Russian National Settlement Depository (NSD), Euroclear’s balance sheet has accumulated €119.9 billion of blocked payments in favor of Russian investors. As a result of their investment, an income of €340 million was received, which is more than half of all clearing receipts under the item “Interest, banking and other income” (€522 million).

“With the growth of sanctions liabilities and the increase in interest rates, the materiality of income from cash balances arising from sanctions against Russia on the financial results of the group is unprecedented. Thus, the Board considers it necessary to separate these revenues from the main financial results when evaluating the performance and resources of the company. The Board expects interest income to continue to rise substantially as blocked payments and repayments continue to pile up in the face of rising interest rates.

Ford sold its stake in a joint venture with Russian Sollers with a five-year buyback option (October 26, 2022)

The bankruptcy of the FTX crypto exchange collapsed bitcoin (November 11, 2022)

Rosatom spoke about new technologies used in the construction of a medical center in Irkutsk (November 8, 2022)