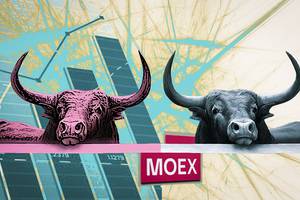 Yesterday’s correction of many “blue chips” benefited the market. The technical overbought observed in some shares has been lifted, and the improvement of the situation on the western grounds turned out to be enough to resume active purchases of Russian shares.

This morning, oil has risen in price by 2%, having gone above $94 per barrel. Not bad grow industrial and precious metals. Large investors expect the Fed to possibly raise interest rates by 0.75 percentage points, but Fed Chairman Jerome Powell’s speech will be soft. Most likely, he will try to calm the markets ahead of the US parliamentary elections.

Therefore, the demand for risky assets in the world increased, and the dollar began to moderately depreciate against a basket of world currencies. However, this trend is not sustainable – the market is now very nervous, and moods can change several times a day.

In the meantime, according to the results of the first hour and a half of trading, the Moscow Exchange Index is growing by 0.4%. There are no clear leaders yet.

Worse than the market looks “Norilsk Nickel”, which was yesterday in the leaders of growth, as well as “Rosneft”, where the technical correction has not yet ended. But at the same time, many analysts consider Rosneft and Lukoil to be the most attractive in the short term, which are due to pay dividends in early December. Then issuers will receive support from rising oil prices due to a possible reduction in Russian production and the cessation of oil interventions by the United States.

The growth of shares of steelmakers resumed, which during the last sessions fell sharply as part of a technical correction. But the purchases of these shares are not of a rush nature, which was observed at the beginning of last week. Analysts suspect that some major strategic investor bought Severstal, NLMK and MMK, possibly on insider information. It is currently not up for auction. It is possible that he either fulfilled his task by buying up the required amount of securities, or is waiting for lower prices.

After yesterday’s 4% rise in Yandex, demand has spilled over to its less liquid competitors, VK and OZON receipts.

In general, the market continues to be in an upward phase. Analysts expect it to rise by at least another 1.5-2% and leave just above 2200 points on the Moscow Exchange Index. However, this may not happen until the beginning of next week. On Friday, the Russian stock market will not trade due to the holiday, and before the three non-trading days, buyers will be more cautious.

In addition – and this should not be forgotten either – it is still difficult to predict not only the rhetoric of the Fed, but also the reaction of the market to it – recently it has not always manifested itself immediately.

Everything is calm in the currency market. The ruble is close to yesterday’s close. Financiers believe that 61.5 rubles. per dollar — are quite suitable for what can be considered the equilibrium rate in the current economic situation. We note here that the currency market of the Moscow Exchange is gradually leaving the speculators due to its low volatility. The remaining risky players are building option strategies, which are calculated on the fact that the ruble exchange rate will not deviate much from the current level.

“Our awakening was expected”: Medvedev outlined five theses on the current moment (November 4, 2022)

Brussels does not have much hope for the effectiveness of the gas price ceiling (November 8, 2022)