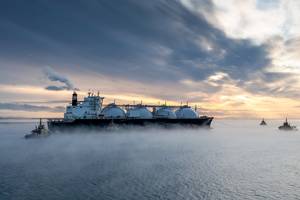 For most of 2022, Russian liquefied natural gas (LNG) sold in Asia with a bang. Russia as a whole managed to solve the problem of reorienting gas flows from west to east after the introduction of dozens and hundreds of European sanctions, including energy ones, in response to the NWO in Ukraine. It was possible to find buyers for gas, which used to go to Europe, thanks to large discounts.

Russian gas is at least not under sanctions yet, but buyers, mostly Western, if it could be replaced, preferred not to buy liquefied natural gas (LNG) from Russia.

Recently, however, buyers’ fears of sanctions or reputational damage have significantly eased. Bloomberg makes this conclusion after analyzing the shipments of gas carriers with Russian LNG recently. For example, the Sakhalin Energy Company sold three cargoes to Asia for shipment in December at prices close to market prices. Moreover, one of the LNG cargoes was even sold at a premium. Meanwhile, as early as September, Asian buyers paid for a lot of cargo at prices that were significantly lower than prices on the spot market at the time of purchase.

By the way, Russia has recently increased LNG exports to a six-month high. For example, in October it reached its March maximum. Last month, Russian LNG exports grew by 1.1% year-on-year.

The main buyers of Russian liquefied natural gas, including almost half of the on the way, according to Bloomberg, France, China and Japan.

China still buys Russian LNG at a discount and, as you might guess, does it with pleasure. In September, Beijing’s imports of Russian LNG grew by a third compared to the first autumn month of 2021, according to Chinese customs officials. And this despite the fact that in general, imports of liquefied natural gas in China decreased by 12%.

Citibank to sell its loan portfolio to Uralsib (October 28, 2022)

Secretary of the Security Council spoke about the prevention of a terrorist attack at the Zaporozhye NPP (November 3, 2022)

5 performances for yesterday in a warm company (November 2, 2022)