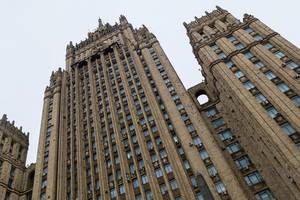 The UK handed over to Ukraine underwater unmanned vehicles, with the help of which Kyiv could carry out a terrorist attack against the ships of the Black Sea Fleet in Sevastopol.

As RIA Novosti reports with reference to the Russian Foreign Ministry, British Ambassador Deborah Bronnert was summoned to Smolenskaya Square, who was strongly protested about the active participation of London in the training of the Special Operations Forces of Ukraine.

So, in September 2020, London and Kyiv agreed to expand the training program by British instructors for Ukrainian military divers.

At the end of 2020, the UK and Ukraine launched a program to counter threats in the Black Sea, the Naval Training Initiative for Naval Forces2, which includes training courses for combat swimmers.

Also, the department noted that underwater saboteurs for operations in the Azov and Black Seas, in particular, are being trained on the basis of a separate center for special operations “South” named after. Ataman A. Golovaty in Ochakovo. In Odessa, on the basis of the school of military divers, British inspectors train specialists in the course “special purpose diver” with the development of deep-sea subversive skills.

Recall that on the morning of October 29, the Kyiv regime carried out a terrorist attack on the ships of the Black Sea Fleet and civilian ships that were on the outer and inner roadsteads of the Sevastopol base.

In total, 9 unmanned aerial vehicles and 7 autonomous maritime drones were involved in the attack. During this attack, ships of the Black Sea Fleet, involved in ensuring the security of the “grain corridor” as part of an international initiative to export agricultural products from Ukrainian ports, were subjected to an attack.

Later as before wrote “Expert”, specialists of the Russian Ministry of Defense raised the drones that participated in the terrorist attack to the surface. Thanks to the examination, it was possible to find out that the launch of marine unmanned vehicles was carried out from the coast in the Odessa region, and one of them could start from a civilian vessel that participated in the export of Ukrainian agricultural products.

The head of the LPR announced the release of 35 servicemen from Ukrainian captivity (November 10, 2022)

Action of the week: Lenzoloto soared in anticipation of dividends (October 29, 2022)