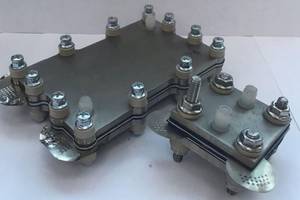 Russian scientists have proposed using the reaction of chlorates with hydrogen to generate electricity. Such batteries will work well in space, deep underwater and in other conditions where oxygen is scarce. Researchers from the A. N. Frumkin Institute of Physical Chemistry and Electrochemistry of the Russian Academy of Sciences and the Federal Research Center for Problems of Chemical Physics and Medicinal Chemistry of the Russian Academy of Sciences published the results of their work in the journal Molecules, the press service of the Russian Science Foundation reports.

“Most batteries use redox reactions. During the operation of such devices, electrons are transferred from one reaction component to another. Traditionally, oxygen, which is easily obtained from air, acts as an oxidizing agent. The researchers suggest replacing it with oxygen-containing chlorine compounds, which are comparable in activity to oxygen. In this case, hydrogen can be used as a reducing agent, for which many technologies for safe storage in compressed form have been developed,” the press service explained.

Since chlorates are inactive under normal conditions, expensive catalysts are required to activate the reaction. But chemists managed to do without them. They found that if a small current is passed through the device first, the battery will begin to produce other compounds that activate the reaction and the current will increase on its own. Experiments have shown that hydrogen-chlorate batteries convert chemical energy into electricity with an efficiency of 40 to 50%. Scientists intend to continue to work on improving the device.

Japan will seek to maintain participation in the Sakhalin-1 project (November 1, 2022)

Mobilized citizens will count one day of participation in the special operation as two workers (November 25, 2022)